Home | There’s no stopping The Killer Robots This July!

There’s no stopping The Killer Robots This July! 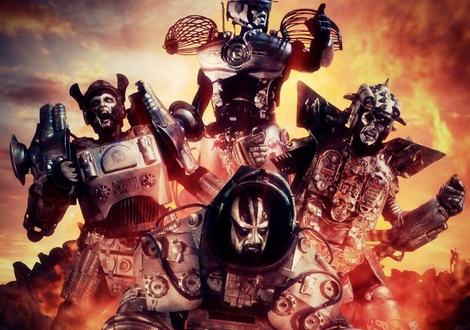 A film that’ll “excite, amaze and confound you” (Quiet Earth), The Killer Robots! Is the brainchild of the band of the same name, a Florida-based outfit that are as well-known for their infectious tunes as they are their unique attire (they wear robot outfits!). The members of the band- – play the core characters with Jenna Hellmuth (Daredevil), Shawn C.Phillips (Return to Nuke ‘Em High Volume 2), YouTube sensation Brian Manowitz, rocker Mandaddy, and WWE wrestler Jesus Rodriguez in supporting roles.

Admirably, all of the costumes, giant monsters, buildings and spaceships in the film were actual miniature models built from recycled bottles, packaging, plasticware and toy-parts!

Official Synopsis: Beyond the Boundaries of imagination, there is a dimension where living machines battle for supremacy, and those who oppose find only destruction.
After meeting their end in a mechanized gladiator arena, four robotic mercenaries – Auto, Max, Strobo and Trog are extracted from a junk pile, rebuilt and recruited as mercenaries for a mysterious organization of android adventurers.

Although reluctant at first, the mercenaries agree to travel to the planet Vidya, an artificial world ravaged by a computer virus that has sent its robotic inhabitants into a state of primitive barbarism. Assaulted by all manner of killer machines and mechanical monsters, the mercenaries must make their way through a tumultuous landscape, activate a mysterious communication device, link multiple universes, and bring about a new age of enlightenment and prosperity for a dystopian galactic civilization.

Written and directed by Sam Gaffin, The Killer Robots! Crash & Burn will be available July 15 on VOD.