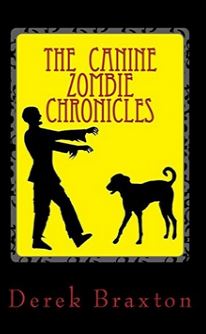 Canines versus Zombies! It is time to find out what role canines play in the zombie apocalypse. “The Canine Zombie Chronicles” collects twenty first hand accounts of the Marcorem Carne Plague from the viewpoint of man’s best friend.

Today’s book review is quite an offbeat take on the zombie genre. You got to give props to writers who approach things from a whole new perspective. In fact it’s almost a given in today’s market that floods the zombie trail with more content than we ever imagined.

In the book “The Canine Zombie Chronicles” by author Derek Braxton we are introduced to a new epidemic called “The Marcorem Carne Plague” (MCP) that had infected the world and then been eradicated 2 years later. The book details the events and perspectives not from human account but from canines. Now you might ask yourself, how so?

As per most zombie viruses, this one follows suit with an outbreak of plagued humans who crave the flesh of the non-affected (More 28 Day’s Later-ish than Dawn of the Dead). The root and source of infection also follows suit per the usual passing to another per direct bite or scratch mark. Though we are told that there is a failsafe of 20 minutes to rid the virus before complete infection, which does give some a fighting chance. These infected were short named IMCP (Infected by the Marcorem Carne Plague) which is how they are referenced in the book.

A squad is assembled to fight the infectious outbreak who are instructed to save not only humans, but infected canines. As odd as that may sound this is also a directive that is direct result of a new development in technology that allows humans to communicate with the canines. The device is named the “Canine Audio Transcommuniticator”. This technology allows a stream of communication back and forth opening up a whole new world of human to dog exchanges. Thus this brings us to the chapters of this book.

At 128 pages, we are given first hand accounts and experiences per the canine perspective. Rich with emotions, observations, and of course dog-speak (that observes the world under their usually lifestyle) we get both horror and humor all wrapped up in one. Braxton seems to have an affinity with the animal world as accounts detail their events and losses in a now chaotic world that has gone astray. It’s a rich experience that at times has to remind us that it is dog thoughts being narrated rather than human circumstances.

The book contains 20 chapters of various canine interviews that were conducted directly by Dr. Johann Gibson. Each chapter is titled per the canine’s name, location, breed and case number.

The chapters are filled with a mix of emotions and observations that understand what is transpiring while being able to comment on it. As one would guess, other dogs are named that might have been acquaintances of the canines or direct friends and family members. Often we learn about back stories to each of the interviewees existence and day-to-day routines. The diversity here is refreshing as we race from one canine perspective to the other each having a different purpose in life and often location.

The outbreak and chaos is revealed as the stories are unfolded over the course of several chapters. While hearing about much bloodshed and forms of cannibalism the book takes us right up to the inevitable vaccine that cures the virus. Heartwarming, horrific, and humorous, this book is indeed a smattering of dog tales that will surely be a read you have yet to encounter.

Derek Braxton shows his passion for zombies, story telling and canines like no other in this strange little ditty, check it out!