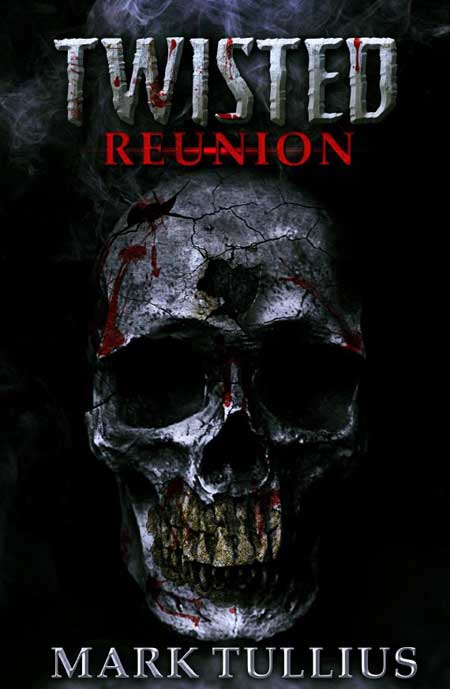 “Twisted Reunion” is a collective of short stories published by Vincere Press and written by Mark Tullius (also featuring some fine illustrations introducing various stories). The stories here were collected from the periods of 2003 to 2008 previously published under numerous magazines and anthologies. I counted around 29 sections of stories totaling in at 284 pages, which is quite alot packaged under 1 release

Twisted Reunion brings the whole bunch under one tidy collective. Stories here are short and sweet ranging from stories that deal with serial killer memory loss, children possessing mind control, murderous babies and even out of the way city bars that offer a little payback to victims of wrongful death.

It’s a smart collection that really keeps things diversified from story to story. I really can’t say I was disappointed with any of the inclusion.

Without giving too much away for readers, the stories here are all designed to end with a punch, however Tullius tends to takes readers on a small journey that resolve on all sorts of bad situations.

How bout a Hellraiser-like experience that promises an eternity of never-ending tormenting deaths? Or maybe finding out your sweet little baby possesses the ability to think and talk like a man. Infidels refusing to bow despite the excruciating torments they must endure all n the name of God. Or maybe you are fascinated more with tales of monsters under the bed that refuse to let go even years later as an adult.

All rightfully creepy stuff that is not only well written but arranged in a way that doesn’t waste time dwelling on lethargic character building. Each designed to introduce a bit of terror thru various circumstances.

Right off the bat, let me say that Tullius is great story teller. As I made my way thru the first few stories I was not only engaged but impressed enough to say that these are the they are truly perfect material for film anthology productions. Now with that said, I don’t mean the filler ones you fast forward to get tap the “better” bits but rather the star attraction segments that make you wanting more.

Twisted Reunion deals in death, afterlife, pain, torture…you name it… a hodge podge of dark fantasticals equipped to not only entertaining but give you a few disturbing thoughts to take away into the night. Packed with punches each offers just enough to give you some great reading time while hungering for more. Imagined visuals jump off the pages as situations take form.

There is great substance here that tends to work wonderfully at times by misdirection and smart writing. One story pathing the way for a whole other path  to come at you (waiting just around the corner). Nice work!