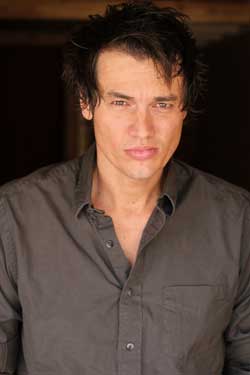 How did you become involved with the film “Tabloid Vivant?”

Jesse:  I had read the script and found out that Kyle was doing it and when I had read the script as you know now from “Charmed” I had spent a good ten years of my career beginning out doing “Charmed” and things like that where I played the good looking boyfriend, the “I love you babies,” and I had been okay. I had done well. I knew there was a time when I would have to prove to everybody that I can actually act. I am not just a pretty face, I can actually act. I knew that was coming but I didn’t really know how to pursue that and when I read Kyle’s script I thought what the hell is this and then I thought, I got to do this. I pestered him and who knows if I was the one he wanted to play the role. I know that there were three to four thousand people that he looked at because he told me. I guess I blew him away. I was prepared and I wanted the role.  I am really lucky to have been able to play the role. I loved the script.

What was it like working with the director Kyle Broom?

Jesse: He was wonderful. He was insistent which was good. This was an independent low budget movie and one of the things that Kyle thought and I agreed with him was so valuable and so important was to have rehearsal time. This is not a movie where an actor can walk on set and just say the lines and walk off set. You have to create the character. One of the things that I applaud him on is that he gave us rehearsal time. 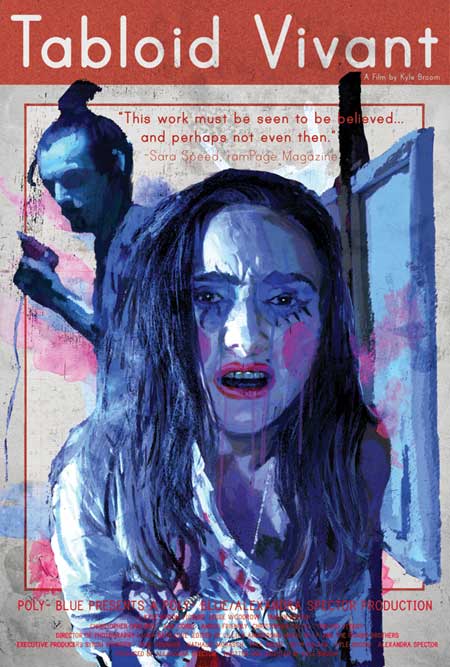 The cast of “Tabloid Vivant,” including yourself is brilliant. What was it like working with the cast?

Jesse: The predominate amount of time I spent with Tamzin Brown. I believe in the same way as I do about my own role. I believe it was written for her. You watch her do it and you can’t imagine another actress doing the role. She is really a brilliant actress. Not only is she gorgeous, she is wonderful. What it does for me, it is makes it easier for me. “Charmed” was much like this movie if you will, I was acting opposite Alyssa Milano, Holly Marie Combs, Brian Krause, and Rose McGowan. They have been in show business for a long time, they know how to act. These guys know how to act. I am a better actor when I act with people who know what they are doing.

Did you have any crazy or challenging things happen while filming “Tabloid Vivant?”

Jesse: The production schedule was very grueling. We shot in Azusa, California which is about an hour and a half north of LA. Every day we had to drive from Hollywood to Azusa which is a two hour shoot one way and then at the end of the day you had to drive back. In the middle of production I got really sick. It is what it is you know you work sixteen hours a day. You are up in the woods and the mountains and it’s cold. You’re spent. I did get sick and the interesting thing about me getting sick is in the movie. Some of the scenes we shot towards the end of the movie so some of the scenes I’m ill, I’m not doing well in the movie and in real life I was not doing well, I was ill too. It played really well. I came to set one day I looked at Kyle and I said man I’m not doing well. I was under the weather, I had a cold. It was wearing on me. He could see that I was mentally, emotionally drained and now physically drained. He said you know what, let’s use it and you look horrible and so does the character. So it worked out really well. 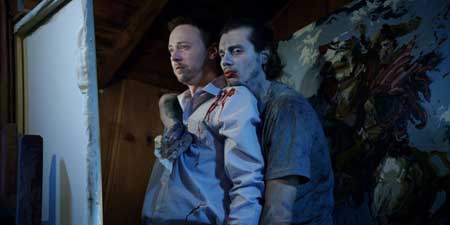 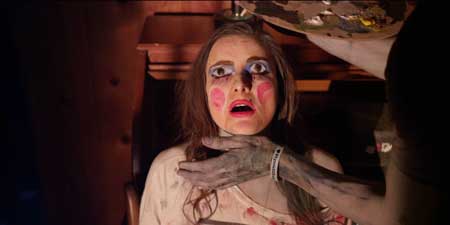 Jesse: Yes, method acting and I am a method actor anyway. 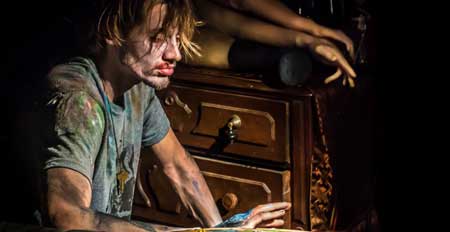 What would you like to say to the audiences that will be watching “Tabloid Vivant?”

Jesse: Enjoy it because it is not going to be Jesse with his shirt off. This is a movie. This is something that you’re going to sit back and say I want to see a movie, I want to be moved and transformed. The “Tabloid Vivant” is kind of its own genre. It is not anything like I’ve ever seen.  It is one of those movies that kind of grabs you.

Jesse: There could be. The characters don’t end up well here but there could be ways to work around that. A guy could raise from the dead in the movies.

Do you think it is difficult or a stigma that Hollywood puts on you because you did mention you are thought as a “pretty face?” You are such a talented actor. Why do you think there is a stigma?

Jesse: Of course. The reason I did “Tabloid Vivant” that I am an actor. I did an Aaron Spelling pilot, years ago when he was alive and Aaron said he hated the pilot but he liked one thing about it and they said what. That one guy Jesse Woodrow. He said write that kid on any show I have right now on the air. He had a bunch of these shows on TV and I told him I wanted to be on “Charmed.” So they wrote me on “Charmed” and when I first met with the casting director he said oh no you’re too tall. I said Julian McMahon is my size, what are you talking about? It was difficult to get anything more. I think I pulled it off in “Tabloid Vivant.” I am so fortunate and so lucky.  I come from an era where acting is a craft, you study and work hard.

Did you know you wanted to be an actor growing up?

Who has inspired you growing up?

Jesse: I have been here for almost twenty years. I say the only way to really be an actor is you have to move to Hollywood. It is going to be a long trip, a long road. If you want to put in the work for ten or fifteen years and go to class and learn the craft. Learn what Marlon Brando did. Marlon Brando is probably one of my biggest heroes. Marlon and James Dean started this movement. I would say go learn how to act, go learn the character work.

Now I have to ask, if they do a “Charmed” reunion will you be involved? For the #Charmed fans!

Jesse: Yes if Rose, Alyssa, Holly and Brian are doing it, I’ll do it. We are all still good friends.

What would you like to say to the “Charmed” fans?

Jesse: I love them and thank you for the great years. I’ve had some really great years with the “Charmed” fans. I love them to death. Holly tweeted something about CBS doing a reboot. “Charmed” would be a really successful reboot. “Charmed” fans I love you and you’ve been so good to me.  Glen loves you. I love you guys. I love “Charmed.” I watched it prior to me being on the show. It was the coolest show on the planet.

But with the original cast?

Jesse: Yes, you could easily pick the show up from where we left off.

I always watch “Charmed” and think I wish I could orb while sitting in traffic.

Jesse: (laughing) Holly on the set is the funniest chick on the planet. The movie “Zoolander” is about me. I had done this SKYY Vodka ad and Ben Stiller called me and said I’d like to make a movie about you. The thing that was funny was I was shooting “Charmed” when that SKYY Vodka ad came out and one day I had come to the set and they had printed out a thousand copies of that SKYY Vodka ad and they pasted it all over the set. It was everywhere. It was hilarious. We had a blast. 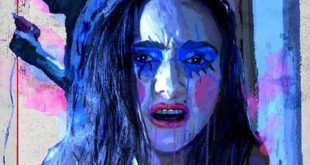