A Loved One’s Faith Becomes Your Greatest Fear in 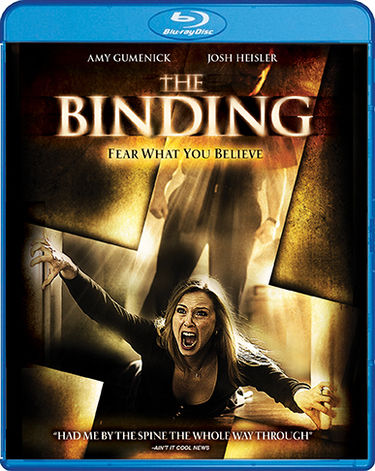 A Psychological Thriller of Deep Conviction Debuts on Blu-ray and DVD on August 2nd, 2016 from Scream Factory

An unsettling spiritual shocker, The Binding shows the darker side of devotion when a religious family’s patriarch begins receiving visions of bloodshed. Written and directed by Gus Krieger, produced by Michael Glassman and Scott Hyman, The Binding presents divine psychological horror through a modern reimagining of the Biblical tale of Abraham, who was commanded by God to bind and kill his infant son. A young minister’s wife (Arrow’s Amy Gumenick) attempts to reconcile her foreboding maternal instincts with her deeply religious husband (Josh Heisler) and his increasingly disturbing intentions. Is he receiving visions from God or unraveling within his own delusions of grandeur? How far will a family’s faith extend when their blind devotion means their violent destruction? Praised for its intelligent design, The Binding became a critical favorite through its celebrated performances and cerebral nuance.

Debuting on Blu-ray and DVD August 2nd, 2016 from Scream Factory, The Binding will feature a host of extras including over 20 minutes of deleted scenes, cast interviews with Amy Gumenick, Josh Heisler, and Leon Russom, a feature-length commentary track with writer and director Gus Krieger, and The Binding’s original teaser trailer.

Once upon a time, God Almighty appeared before one of the chosen, and commanded that he slay his own flesh and blood. Perhaps that time has come again…

Sarah Iman (Amy Gumenick, Arrow, TURN: Washington’s Spies) is a young mother and faithful minister’s wife. Her religious devotion and idyllic home life, however, are put to the ultimate test when she is forced to uncover the truth behind her husband’s horrific visions. As tensions rise and secrets come to light, Sarah soon finds herself spiraling toward a terrifying choice between faith and blood.