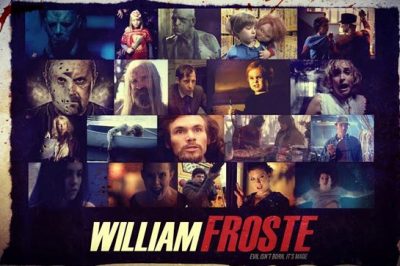 Los Angeles, CA – Over in beautiful Palm Springs and Los Angeles something dark is stirring. The dream of an “ultimate” horror film is taking flight. Vision Films has linked a deal with Absinthe Productions for the highly anticipated horror film “William Froste”, which will feature the largest ensemble horror cast ever to grace the silver screen.

With horror veterans from iconic horror films and franchises including “Friday the 13th,” “Halloween,” “Texas Chainsaw Massacre,” “Child’s Play,” “Nightmare on Elm Street,” “Cabin Fever,” “Insidious,” “I Know What You Did Last Summer,” “Sleepaway Camp,” “Sharknado,” “Paranormal Activity,” “The Devils Rejects,” “Night of the Living Dead,” “Pet Semetary,” “Hostel,” “The Hills Have Eyes,” and more, fans are guaranteed to see something very special.

“William Froste” is set in the rural backwoods town of Willow Creek, a town made up of familiar faces from past horror films. It’s a place where previous horror villains now become victims, victims become villains, past heroines no longer survive and the dead come back to help save the living.

The film is already being described as “The Expendables of Horror” and while Absinthe Productions is busy building sets, Vision Films has already began making domestic and international pre-sales.

“William Froste” is a female directed film, from filmmaker Natalie Bible and producer Brieanna Steele. Natalie Bible says: “We are excited to be working with Vision Films on this extraordinary horror film. Every iconic actor has been strategically cast in the roles they are playing and are substantially important to the films plot. These are not cameos. They are all lead and supporting roles. Using these iconic faces of horror, we invite you to meet the new characters they will play and the old baggage they carry.”

During production, television Docu-series “Behind the Frosted Glass” will be created to take fans behind the scenes into the world of William Froste and beyond. Experience exclusive interviews as “franchises” interview “franchises”, take an extended tour of Willow Creek with some of the towns creepiest tour guides, enjoy a meal with 3 generations of Michael Meyers at the “Killers Korner”, kick back with a glass of  “Crystal Lake Wine” at “Heroine Happy Hour” with horrors favorite heroines, and take an underground stroll through Willow Creek Mortuary with the most iconic victims in horror history. And that’s just the first episode.