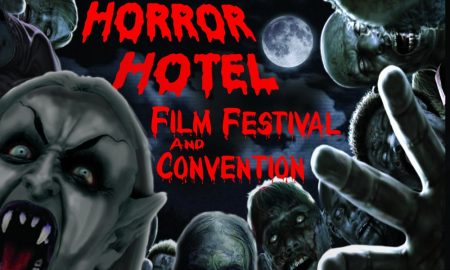 The International Horror Hotel has announced its official awards list and film selections for the 5th edition of the festival, which will be taking place June 9th through 12th. Horror Hotel is a yearly film festival and convention celebrating some of the best independent horror and science fiction films from around the world, uniting film fans, filmmakers and industry professionals who share a love of the genre.

This year’s festival will highlight 103 features, shorts, music videos, TV pilots and web episodes from around the world. In addition to the two screening rooms running throughout the four days of the festival, there will also be several “Best Of Horror Hotel” films featured as part of the new drive-in style screenings on Saturday night, following the new classic car show. The festival will also feature two days of film lectures and panel discussions, a convention, live special effects makeup and scream queen competitions, networking parties and more.

“Not only do you get to see great horror films, you can also meet the creators of the films: the producers, directors, actors, writers, crew,” says festival director Ray Szuch. “Unlike many festivals, all of our attendees are in one central location for the entire weekend, maximizing the opportunity for industry networking and a chance for spectators to meet the filmmakers and learn more about the creative process.”

All festival events will be held at The Clarion Inn & Conference Center, located at 6625 Dean Memorial Parkway in Hudson, Ohio, conveniently located between Cleveland and Akron. The full film lineup and the awards lists for film, script and film scoring winners can be found at www.horrorhotel.net, along with directions, ticket information and vendor information. Additional event updates will continue to be added as the event grows closer.