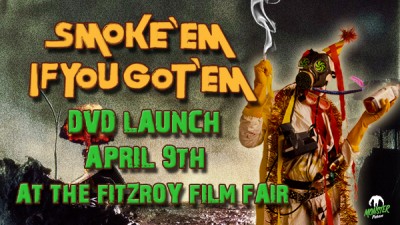 To celebrate the formation of Monster Pictures’ new Monster Masters label, we’ve joined together with the fine folks at The LuWow to launch our first release, Ray Boseley’s 1988 Melbourne-made ‘Nuke and Puke’ masterpiece, SMOKE ‘EM IF YOU GOT ‘EM as part of the Fitzroy Film Market on Saturday April 9th.The launch will include a 16mm screening of SMOKE ‘EM IF YOU GOT ‘EM, a Q&A with select cast and crew hosted by Fatal Visions editor and Fangoria scribe Michael Helms followed by a very rare live performance by Scrap Museum / Blue Ruin featuring Quincy McLean, and Mulaim Vela. Punters will also be able to buy a copy of the DVD a month before its official release at JB HiFi – Available now for pre-order

In the smouldering devastation of post nuclear bomb-blasted Melbourne, a periscope protruding from a pile of rubble leads three desperate scavengers to a subterranean fall-out shelter. They muscle their way in, only to discover a raging party in a converted wine cellar, celebrating the Big Meltdown. There’s a band, booze, sex, drugs and a horde of sweat-soaked revellers partying like there is no tomorrow… which for these poor radiation-drenched end-of-the-worlders there isn’t. What choice do the scroungers have but to join in?

SMOKE ‘EM IF YOU GOT ‘EM is a long lost post-apocalyptic classic set slap bang in the middle of Melbourne’s 80’s underground music scene. Starring Nique Needles (DOGS IN SPACE), Rob Howard, Fred Dugina, Danny Lillford (TRAILER PARK BOYS) and featuring the music of BLUE RUIN, the film is a satirical look at the last days of mankind.

ABOUT THE FITZROY FILM FAIR
The Fitzroy Film Fair is a riot of all things movie for sale and display. Delving into cult cinema, special effects, merchandise, memorabilia, VHS videos, blu-rays, DVD’s, soundtracks and even super 8mm and 16mm films.

So come down and enjoy browsing through the many stalls supping a beer or cocktail amongst fellow enthusiasts and enjoying some of the entertainment on offer.

The Film Fair starts at 12pm and winds up at about 4pm when the launch party will take off.

Tags Smoke 'Em If You Got 'Em