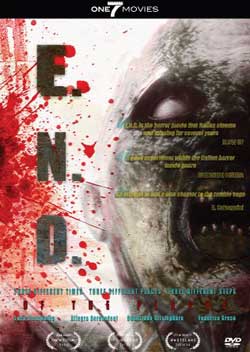 Day zero: When it all begins, in a funeral home. Day #1466: When the epidemic has already devoured the entire planet, set in a house in the woods. Day #2333: When the zombies have become something more than the monsters that we know, in a prison surrounded by post-apocalyptic scenarios.

Zombies are all the rage.  The undead flesh eaters have found new life on both the big screen and the small screen recently.  With shows like The Walking Dead, Z Nation, and iZombie pulling people in, it’s a wonder that we haven’t felt major zombie overload.  Movies haven’t let up either, with lower budget films giving audiences more zombie action to whet their appetites.

With zombies being such a big part of modern entertainment, Italian filmmakers Luca Alessandro, Allegra Bernardoni, Domiziano Cristopharo, and Federico Greco put together a movie of their own that tackles the undead menace.  2015’s E.N.D. chronicles a zombie outbreak through small peeks at different times as it runs its course.  It begins with the first case of disease and ends with a possible cure.  The movie is split into four distinct segments, and must be discussed as such.

The first segment was titled Day 0 and shows how the virus first began.  In a nightclub bathroom, a woman and a man were getting their freak on.  When he went to the toilet, she took a hit of cocaine.  It didn’t go well and she soon became a flesh eating monster.  That was about it for that segment.  Quick and easy, setting up the remainder of the movie.

This opening segment of E.N.D. is a good entry point.  It establishes the story without getting carried away.  There is restraint.  The filmmakers knew that they didn’t have to go big.  They only needed to set up that the disease was beginning.  They kept away from a crazy and insane setpiece, instead having an isolated two person incident.  It worked very well.

Following this opening was Day #1 – Day #2.  This segment followed a group of people working in a funeral home who soon discovered the outbreak.  There wasn’t a whole lot of meat to this part.  It was more about setting up characters that won’t pay off until later in the movie.  Everything about this segment is fine.  The final minute or so was the point when the characters found out about the outbreak and then it ended as one of the dead bodies reanimated.

Now we come to the most pointless part of E.N.D., Day #1466.  It felt like a completely different movie.  The first part of this section followed a man walking through the woods with his dogs.  There were about ten minutes of walking around before he found a zombie and died.  Then it followed a trio, two women and a man, as they drove a van through the woods.  One of the women was pregnant.  They ended up trapped in a house surrounded by zombies.  There was some fighting.  That is all I can say about the story of this segment without ruining the two big moments at the end.

Day #1466 din not connect to any of the other segments.  There were no characters that were in other segments.  The events that unfolded did not have repercussions.  This half hour of the movie could have simply been somebody’s short film that was inserted into E.N.D. as some filler to boost the movie up to a feature length runtime.  It wouldn’t be the first time that this has happened.

Finally, we come to Day #2333.  The last segment of E.N.D. took place after the zombies had mutated into intelligent beings.  A fight broke out as the humans tried to exterminate the zombies once and for all.  It was the most entertaining and gripping part of the movie, paying off the characters that were established in the Day #1 – Day #2 segment.  There were actual struggle and stakes.  It brought in some well performed action, and gave some life to the zombie side of the story. 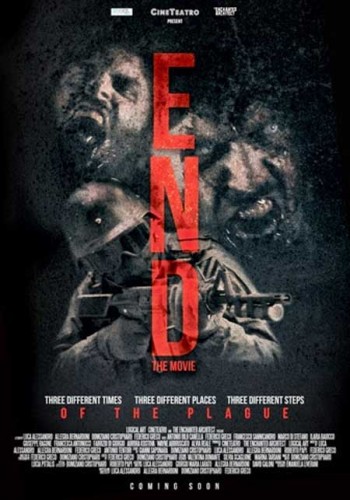 Day #2333 had the most world building of any segment.  Starting with zombies working like a military unit helped to establish that they had gained intelligence that could threaten the human population beyond the whole flesh eating element.  Headshots were no longer able to kill zombies.  The humans needed to find other ways to rid the world of the zombie menace.  There was also the added element that there was a potential cure.  All of these made the segment feel more fully formed than the others.

One thing that stood out throughout the whole of E.N.D. are the effects.  There was some solid makeup work done to build the zombies’ faces.  They seemed shallow sometimes.  Other times they looked like there had been some physical trauma.  In the final segment, many of the faces looked like they had been stitched back together after being torn apart.  In most cases, this was well done and generally believable.  There were a few instances where the effects look bad, but those were few and far between.  There were a few instances of computer generated effects inserted in when whole zombie characters needed to be shown.  These effects did not look good and would have been better off excluded from the movie.

E.N.D. was not a good movie as a whole.  Day #1466 was a sagging portion of the movie that made watching more of a chore than a pleasure.  The other three parts of the movie were still worth watching, though.  They made up for how uninspired and unentertaining that middle segment was.  They told a mostly complete and coherent story and did it well.  You can fast forward through Day #1466 but the other three parts are worth checking out for any fan of zombie movies.