Scream Queen Stream to drop a new episode every Friday at 11:00 AM

Jessica Cameron and Heather Dorff are scream queens and best friends who have been tearing up Los Angeles for the last few years with their legendary exploits, which their legions of fans have been rabidly following on social media. Now the dynamic duo of indie horror is set to bring their adventures to an even wider audience through Scream Queen Stream, a brand new variety show that showcases their amazing lives like never before. 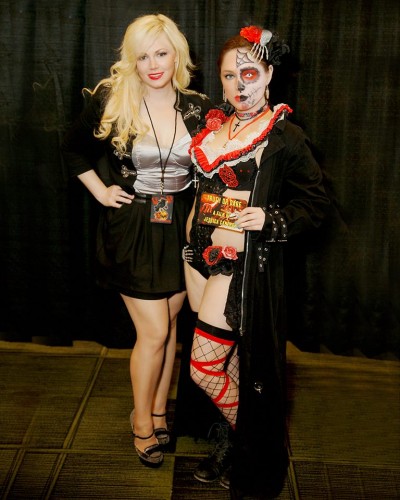 Every Friday at 11:00 AM Scream Queen Stream will present an epic new adventure featuring everybody’s favorite scream queens, Jessica Cameron and Heather Dorff. In the first episode, which premiered February 19th, You can see Jessica try to show Heather super-disgusting videos, and Heather’s hilarious reactions! You will also see Heather try to teach Jessica to cook, and Jessica fail spectacularly at it!

Upcoming episodes will feature drinking games with Danielle Inks and other scream queens, #DrunkDorff in action, and behind the scenes horror convention madness. By following Scream Queen Stream, you will get to experience all the trouble these two crazy young gals can possibly get into from the safety of your own home! You will also get to learn a lot about the indie horror scene through fun and informative interviews with the likes of Amy Hoff, Patrick Robert Young, Powell Robinson, and Jonathan Weichsel.

The series is funded through the subscription service Patreon, and subscribers gain access to exclusive content such as weekly giveaways, group and private live streams with Jessica and Heather, signed postcards, and much, much more!!! Anybody can watch, but subscribers get a close, intimate look at the making of the series, and are even able to offer input such as suggestions for future episodes.