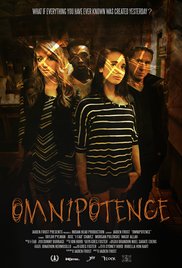 Four college students learn that they’re just characters in a deranged writer’s story and all but one of them will soon die.

Another short film. Today we have OMNIPOTENCE, written and directed by Jaiden Frost.

Interesting concept – four students are hassled by an apparently crazed man in a diner, who informs them they are just constructs of a work of fiction and all but one will die before the day is out. Of course, they figure he’s eaten one too many magic mushrooms and disregard him. As they day goes on, however, they start to think more about what he said and wonder if maybe there might be some truth to it after all.

I’m all there for breaking the fourth wall, and in this case the fourth wall doesn’t even exist. We come into the story knowing its a story and the characters know they are in a story, as well.

I realize it sounds complicated, but its really not. The film is a straight forward story, shot in a grindhouse style. And when I say that, I don’t mean grindhouse used ironically. I mean it really looks timeless, like it may be a lost film from the 70s.

All the cast are first time actors, with the exception of Mr. Frost who has a few other credits as an actor as well as directorial credits. The performances are good, and i hope to see some of these people in other projects.

Not much else I can say about this film without spoilers, so using my special “short scale” of one to five, five being awesome, I’m giving this film 3 stars.