THE ART OF HEAVY METAL, THE MOVIE (PAPERBACK) 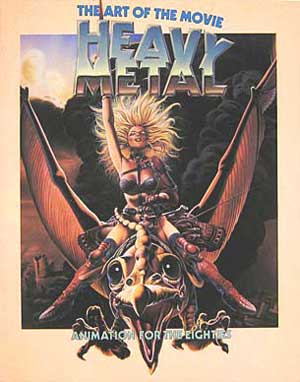 1981 was a great year. The world had no idea what was in store for them in the fantastical animated film based on the magazine of the same name “Heavy Metal”. I had just seen the movie and came across this book which was one of the few books out at that time that really covered the film.

The Art of Heavy Metal gives us the production ends and animation stories that went into making this great film. 8 stories were created that were to be dispersed among several teams of talented animators all with the single goal of making each its own but with a feeling like the original strips and feel of the magazine.

The book details what an undertaking this was from the somewhat groundbreaking intro of “soft landing” which incorporated several photos combined with animation, to the realism of “Harry Canyon” which was painstakingly drawn by hand without use of rotoscoping. B17 which was changed a few times before its completed version describes how the teams solved the issues with trying to animate a B17 to the desire of the director. What is interesting is that this was a time when computers really weren’t that much of an aid to the process.

Each frame had to be drawn, animated, converted to cels, painted and so on. Then add to that the details of making them work within a Heavy Metal scenario. Some reports of exhaustion and long hours are discussed due to the conviction of the animators wanting the pieces to be just right. Even today, the level of artistry is unmatched in any animated movie. What transpired was a true artistic creation that shows the labor of love put into it. The book gives great behind the scenes sketches, renderings, early concept art, film stills, and production photos that went into the process.

The entire production is discussed from origins to the soundtrack and bands chosen to accompany the animation. An inside look at sequences are fascinating….. from taking one medium and combining it seamlessly with another. B17 which was originally titled “gremlins” reveals its unique look that came from a happy accident of shooting the airplane as a model and then taking the stills to have them inked on top. Texture and lighting carried over from the 3d models shot which introduced a unique lighting realism to the animation.

“So Beautiful” began simply with a 3D rendering of the pentagon and blended into a traditional hand drawn sequence to carry it forward. Intricate details are discussed along with the production issues that were encountered. For instance “Den” which was based off of Corben’s excellent series created a challenge when the animators had to deal with naked bodies as opposed to just animated characters. Coloring and redos were tested and simplified based on output tests, along with simplification shortcuts without losing the feel of the original art.

“Stern” and the animation techniques for lip syncing and such are revealed as well as the groundbreaking and fantastical ending piece titled “Tarna”. There is very few books if any on the incredible film, in research you can still track this one down as a used book thru alternate channels. I would have wished for this book to be 3 times as long but its still better than nothing.