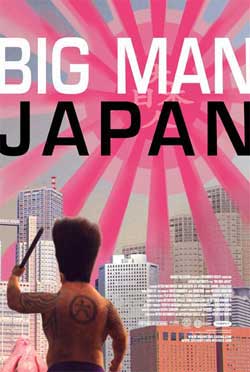 An eccentric man aged about 40 lives alone in a decrepit house in Tokyo. He periodically transforms into a giant, about 30 meters tall, and defends Japan by battling similarly sized monsters that turn up and destroy buildings. The giant and the monsters are computer-generated.

Check out the trailer for “Big Man Japan”

Just when you began to think that Asian films can’t be clever anymore (or maybe not) comes along a cool little piece of gigantic proportions! Big man Japan. For me the trailer was the clincher before even consideration, and I was hooked. The last in the 6-shooter series from Magnet is an Asian horror / humor/ action piece originally called Dai-Nipponjin.

As we join our interview in progress, we find that Masaru Dai Saito (Hitoshi Matsumoto) our focus, is giving us the rather bland details of his life. In fact in the first 10 minutes you might be wondering what is so interesting that I should stick around to listen to this rather ordinary man with ordinary rituals. Well never have you been so wrong as our mockumentary everyday man is actually Dai Nipponjin (“Big Man Japan”) the hero of Japan. As it rounds out, with quite a few questions that seem to be wasted, we see him called into Japan’s Dept. of Monster Defense to transform into his alter ego Big Man Japan. A Godzilla sized, pointy haired mammoth of man that looks like a lower budget Hulk without the green skin and anger. Yes he transforms into a CGI character!

But jokes aside, the CGI is cheesy and that’s exactly the charm about it as he interacts with Japan and equally ridiculous monsters. Our man is right out of a computer game as it would seem as he battles the forces of loony and bizarre.

Now a little back story! Dai’s been at this for quite some time battling Japan’s monsters and helping to defend the country. In fact as a 4th generation Big man Japan, he recalls in his interview that back in the day there were more monsters and inventive creations to do battle with. Now he feels more like a washed up superhero with alot less places to confront monsters than the former 52 years. His base was founded on tradition in the ancient times but fears that the new generation is more geared at keeping things cleaned up.

Barely able to afford rent, he gets paid on his talents when they are needed but apparently the military doesn’t pay much for being a superhero. In a hilarious scene Dai arrives at a facility to prepare for transformation only to approach a gigantic wire suspended pair of shorts that he can “grow up” into. The process seems to be progressed by injecting him with electricity so he can transform into Big man Japan.

Upon after which he runs out to eliminate all the new monsters that occasionally pop up. Now lets talk a bit about the monsters as they were a hand down highlight for me. Lets see …since they weren’t given proper names I’ll call them “Rubber band monster”, “1 legged head foot, “ The eye throwing creep”, 1 horn-devil creep” and the “Strange Flavor Monster”. They are all pretty silly and campy which adds to the fun. Our hero Big man, returns to his human form 3 days after he shrinks back down to size. Pretty much its life as usual until the next call for Big man.

The whole premise is rooted in retro Asian tradition that saw old school monsters such as Mothra, Godzilla and Ghidrah pushed to the frontlines.

In a turn of events the last act of the film actually gives a throwback to the “Ultra Man” days with “non-cgi” characters battling to the death. If that wasn’t enough we get a special visit from new superhero’s who call themselves “Super Justice”. Pure camp, but also alot of fun to watch. Johnny Soko would be proud!

Absolutely absurd in every way, these are no Godzilla-era monsters. These are the rejects from of the land of silly come forth to embarrass themselves and get an ass whooping! I’m constantly amazed at the Asian market’s ability to come up with really crazy stuff…so add this one to the list!

Entirely inventive and a joy to watch! I loved every bit of the Big man movie!