Home | News | Post Mortem: The corpses are piling up! 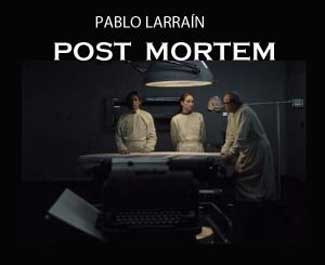 Synopsis: “55-year-old Mario works in a morgue typing autopsy reports. In the midst of the 1973 Chilean coup, he fantasises about his neighbour, a cabaret dancer, Nancy, who mysteriously disappears on September the 11th.

After a violent army raid on her family’s home, he hears about the arrest of her brother and father, a prominent Communist and Salvador Allende supporter. Troubled and spurred on by the thought of losing his would-be lover, Mario begins his frantic search for Nancy.

Allende’s government has been overthrown and people are dying in the streets. The Chilean Army seizes the morgue and numerous corpses pile up, but Mario can’t get his mind off of Nancy. He carries out his job, thinking that he might find her among the dead, and one night…”