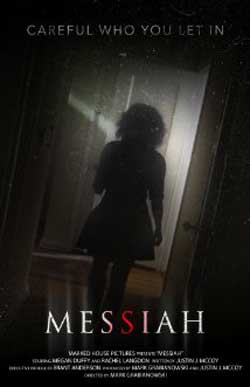 A young woman’s seemingly normal day turns on end when she involuntarily finds herself in the middle of a dark secret.

Another short film, kiddies. This time we have MESSIAH from Marked House Pictures, written by Justin J. McCoy and directed by Mark Grabianowski. This film is a debut in horror for both gentlemen and is Mr. McCoy’s writing debut.

Our story focuses on Courtney (Megan Duffy) as she comes home on an average day. Halloween is coming, and her mother has left instructions to decorate for the holiday. Courtney’s boyfriend/husband Paul (Joey Kloberdanz) is on a trip to Madrid so she has the house to herself.

Upon arrival, Courtney finds a pamphlet in her door from a religious organization asking if she is “ready for the Messiah”. Courtney tosses said pamphlet and goes on with her day. She lets the dog out, gets a big glass of wine, reads a few messages from Paul on her cell phone, then takes a bit of a nap.

But something is definitely not right, although Courtney doesn’t quite know what. And when a strange woman (Rachel Langdon) appears wanting to discuss the aforementioned pamphlet, things just get worse. This day may have started pretty normal, but will most likely not end that way.

This was fun. It almost feels like a prequel or prologue for a longer story. The ending left me wanting more to happen, to get some exposition on what just happened. It’s a pretty straight forward horror story that perhaps is a teaser for a feature film down the line. I would be interested in that, if it comes.

So using my special “short scale” of one to five, five being awesome, I’m giving this film 3 pamphlets.