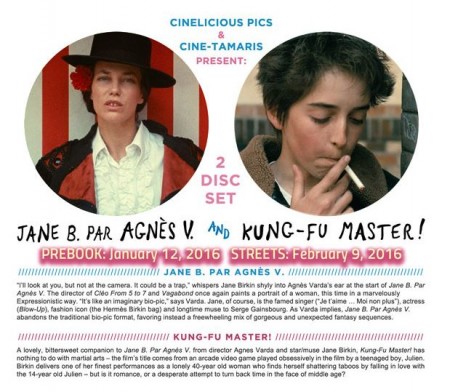 JANE B. PAR AGNES V.: Iâ€™ll look at you, but not at the camera. It could be a trap, whispers Jane Birkin shyly into AgnÃ¨s Vardaâ€™s ear at the start of JANE B. PAR AGNES V. The director of CLEO FROM 5 TO 7 and VAGABOND once again paints a portrait of a woman, this time in a marvelously Expressionistic way. Itâ€™s like an imaginary bio-pic, says Varda. Jane, of course, is the famed singer (Je tâ€™aime â€¦ Moi non plus), actress (BLOW UP), fashion icon (the Hermes Birkin bag) and longtime muse to Serge Gainsbourg. As Varda implies, JANE B. PAR AGNÃˆS V. abandons the traditional bio-pic format, favoring instead a freewheeling mix of gorgeous and unexpected fantasy sequences.

In each, Jane inhabits a new character, playing a cat & mouse game with Varda as they explore the role of the Muse and the Artist, all the while showcasing the multifaceted nature of Birkinâ€™s talent. Iâ€™d like to be filmed as if I were transparent, anonymous, like everyone else, says Birkin. But her wish to be a famous nobody is impossible to achieve; Birkin is simply too magnificent, too mesmerizing. Here, Vardaâ€™s signature mix of aesthetic innovation and generosity of emotion results in a surreal and captivating essay on Art, Fame, Love, Children and Staircases. For its first-ever U.S. theatrical release the film has been newly-restored from the original 35mm camera negative, overseen by director Varda herself.

KUNG FU MASTER: A lovely, bittersweet companion to JANE B. PAR AGNÃˆS V. from director Agnes Varda and star/muse Jane Birkin, KUNG-FU MASTER has nothing to do with martial arts — the film’s title comes from an arcade video game played obsessively in the film by a teenaged boy, Julien. Birkin delivers one of her finest performances as a lonely 40-year old woman who finds herself shattering taboos by falling in love with the 14-year old Julien — but is it romance, or a desperate attempt to turn back time in the face of middle age?

KUNG-FU MASTER is truly a family affair: Varda’s son with the late director Jacques Demy, Mathieu Demy, plays Julien — and Birkin appears here with her two real-life daughters: Charlotte Gainsbourg (from Lars von Trier’s MELANCHOLIA) and Lou Doillon, her child with well-known filmmaker Jacques Doillon. Briefly released in the late 1980s in the U.S. and long unavailable here, KUNG-FU MASTER has been beautifully restored from the original 35mm camera negative. It’s a film in which all the younger actors are the children of the director and lead actress says Varda. It was like a picnic, you know?