Horror Funding: THE UNKINDNESS OF RAVENS

In the bleak highlands of Scotland, an army veteran must battle his demons in a last desperate bid to reclaim his life and his sanity.

The Unkindness of Ravens was shot on location in Fife and Perthshire, Scotland by a fearless and dedicated Scottish crew led by director Lawrie Brewster. A co-production between Hex Media and Dark Dunes Productions, the film seeks to explore the effect of the horrors of war on the human mind through the media of beautiful poetry and brutal violence. The team are currently running a Kickstarter campaign seeking finishing funds for the movie.

Andrew Alburn, a homeless veteran suffering from PTSD, is plagued by flashbacks of a traumatic event he witnessed while serving in the armed forces. He travels to a retreat in the remote Scottish Highlands hoping to overcome his fear of ravens, the dark creatures that populate his visions, but, in this bleak wilderness, his nightmares manifest into an enemy more powerful than he could ever have imagined. He must battle these monstrous entities as well as his own inner demons in order to keep his life, and reclaim his sanity. 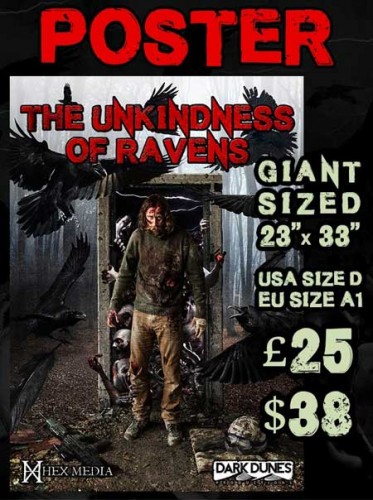 Interesting Facts/Stories from the Set

Using Kickstarter, we’re hoping to get some finishing funds to complete the soundtrack for the film, produce DVDs and launch a marketing and distribution campaign. All going well, the film should be complete and ready for release in the summer of 2016.

Tags THE UNKINDNESS OF RAVENS