Ninjas… Ninjas… and more Ninjas! The Cannon Ninja Trilogy comes to the UK in a new Dual-Format special edition collection

Eureka Entertainment to release THE NINJA TRILOGY, a trio of crazed martial-arts classics from the 80s starring Sho Kosugi, in a Dual Format (Blu-ray & DVD) edition in the UK on 18 January 2016.

The wild world of Cannon Films rarely became more delirious or influential than this trio of rollocking, crazed action classics. Beginning with Enter the Ninja, they spearheaded a craze for the titular martial-arts assassin that spiralled throughout the decade and beyond, but this eccentric trilogy still stands alone. 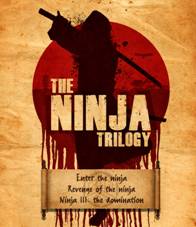 Enter the Ninja (featuring Franco Nero and Susan George) deals with a couple on oil-rich land in the Philippines under siege from a ruthless industrialist. Revenge of the Ninja moves to Salt Lake City, Utah, where Cho and his son Kane begin a new life after their family is killed in Japan. After opening a doll shop, a criminal betrayal leads to an almighty showdown. Ninja III: The Domination unleashes the tale of an aerobics instructor possessed by an evil ninja’s spirit to gain revenge from beyond the grave.

AVAILABLE TO ORDER FROM: