In THE GIRL IN THE PHOTOGRAPHS, big-city glamour clashes with small-town values when a celebrity photographer and his entourage descend upon a sleepy community to investigate the bloody doings of a serial killer.

“Nick Simon’s story is really everything you would want in a classic Wes Craven film,” said Mitch Budin, co-president at Vertical. “We are thrilled to be in business with Nick and the rest of the filmmaking team to bring their vision for an old school horror film to audiences.”

“This film drew inspiration from my deep love of horror films in my childhood and I wanted to make a horror film that I would want to see as a fan of the genre.  We got down to one of the most important elements of a classic horror film: the thrill of being scared and not knowing what is around the corner, or worse yet, knowing exactly what is around the corner,” said filmmaker Nick Simon.  “I am excited to work with Vertical Entertainment on the release campaign and I am beyond grateful to everyone who had a hand in getting this film made, especially my mentor, Wes Craven.  This film is dedicated to his memory; it was an absolute dream come true to have collaborated with Wes, and also renowned cinematographer Dean Cundey.  I have been humbled by their kindness and passion for telling this story with me.”

And in a 2014 statement from Wes Craven attributed to him during the development stage for the film: “Sometimes you read a script and you just know. From first draft to final cut, Nick has told a unique story that will leave you wondering: is it always good to be noticed? It has been a pleasure to work with Nick from his days in my WGA mentor group to picture lock. You’ll be hearing from him again.”

THE GIRL IN THE PHOTOGRAPHS was directed by Nick Simon, written by Osgood Perkins, Robert Morast, and Nick Simon, executive produced by Wes Craven and Nawaf Alghanim, produced by Thomas Mahoney and Andrea Chung, with cinematography by Dean Cundey, editing by Michael Griffin, production design by Eric Fraser, and music by Nima Fakhrara.  The film was made by Alghanim Entertainment.

The deal was negotiated by Rich Goldberg, co-president, and Peter Jarowey, VP of Acquisitions, at Vertical, and by CAA on behalf of the filmmakers.

Tags THE GIRL IN THE PHOTOGRAPHS 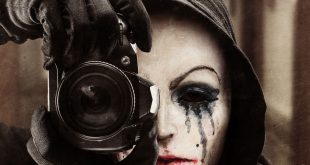