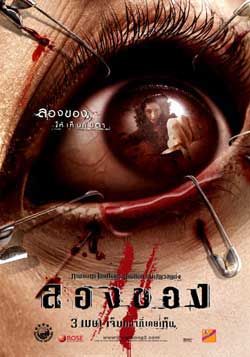 Witness the origin of black magic, and get ready for a feast of non-stop scare.

The hair-raising supernatural thriller that dares you to open your eyes throughout its carnival of shock and fear, Art of the Devil 3 is the sequel of the global hit from the original directors and cast. The film blends the mysticism of local dark magic with inventive scare tactics that made Art of the Devil 1 and 2 such an unforgettable experience among viewers around the world.

Art of the Devil 3 will bring back Panor, a seductive schoolteacher pursued by a horde of young men. When an ex-soldier tries to steal her darkly powerful Three-Eyed Devil, Panor has to fight back, and their encounter leads to a spine-chilling supernatural duel.

It seems the Art of the Devil films have become somewhat of an ongoing lineage. My take however will have to be limited to this film for the time being until I get around to the first 2. As it is written, this is considered the prequel of the bunch.

The film directed by Ronin Team begins in the deep drudgery of black magic as Dit a practitioner challenges his master in hopes of attaining the valued 3rd eye. The 3rd eye seems to be a supernatural power of sorts that gives the user extra ability while it becomes centrally located on the forehead. The attempt is unsuccessful and the 3rd eye unacquired, though the master is still killed in the battle.

Cut to our main story. Ta has returned home to stay with his relatives and grandfather. After 10 years of schooling he has come back to visit and settle past unfinished business . The past catches up very quickly as we are take into several flashbacks of when Ta was tutored as a boy by hired hand Panor. Panor a beautiful women, succeeds in seducing the father Prawase and getting him to poison his current wife Duen.

In an effort to avenge the now deceased Duen, the family performs a ritual to transfer the soul of Duen into the body of Panor. At a younger age Ta failed to complete the ritual but now he’s got his second chance to make things right.

They hire the aid of Dit to help perform the ritual which proves to be a success. Panor is removed from the body and trapped inside a mirror. Seems like the kind of trickery those Asians are always up to. Well at this point you still need to pay attention because there is trouble still to come. As it is, DIT wants the 3 eyed devil that he saw in Panor during the ritual. And for that reason brings her spirit back from beyond with dire consequences.

Because of this, the family still find themselves dealing with the vengeful spirit of Panor. The revenge of course is cold and ruthless. Our man Prawase is tortured as he watches the evil spirit kill off his family one by one. By torture, I mean typical hard core style. This time we get to see his eyes peeled back as she safety pins his eyelids. He also gets a nice helping of salt rubbed in for good measure and some hot wax drippings. There’s one thing these Asian films know about and that is torture. The rest of the film runs its course with the Panor instigating few more kills through black magic trickery and a final confrontation of Panor and Dit. At the end of the day AOTD3 turns out to be another revenge film with some graphic violent highlights. The whole family seems to be pretty focused on this vengeance kick so it doesn’t really amount to much more than that. There is the moral message weaved throughout that one shouldn’t play with black magic as to suffer a rupture of their karma. In a way that message comes full circle in the resolutions we get.

In the trend of extreme moments to sell a story, AOTD3 does just that with its graphically depicted marketing posters and unnerving trailers. I’ve seen alot more brutal, so in a way this one might be lighter than other cat3 Asian horror films. Though as you know a single scene of torture cant really sustain a story. Luckily there is enough of one here to pull it together. At the time of review there wasn’t an IMDB listing yet so I cant comment directly on the acting inclusions. Though each worked cohesively with the roles given.

The film is an intertwined plot but at times it can also lose the viewer with too much information. At other times just not enough. As I’m told this 3rd part is actually the prequel to AOTD #2, so maybe the next one to watch would be that one to pull the pieces together. I’m sure the AOTD moniker will continue on into more sequels as it seems to have had some success with hardcore fans. In closing though it was merely an ok film and not much more.

Tags Art of the Devil 3