Campion singled out “The Librarian” after reading an advance copy of “Nightmares Unhinged.” Filming will begin in London next summer once Campion finishes directing “The Naughty List,” another short based on work from popular horror author Brian Keene. 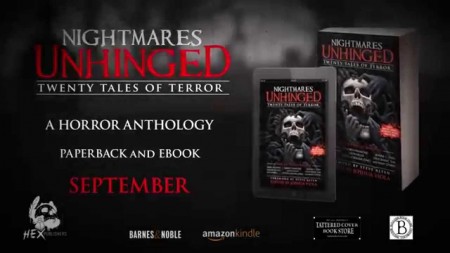 Campion began his career as an illustrator before working as a visual effects artist on films such as “The Lord of the Rings” and “Sin City.” In 2011 he directed his first feature film, “The Devil’s Rock.” The Devil’s Rock was released theatrically in New Zealand and the United Kingdom, and sold to more than 30 territories including North America, Germany, Japan and the Middle East, Australia and South America.

As a filmmaker, Campion’s multi-award winning short films “Eel Girl” and “Night of the Hell Hamsters” have screened at almost every major genre film festival worldwide and are both favorites on the horror-film festival circuit. “Eel Girl,” a provocative science-fiction/horror short, won the Grand Prix at the Court Metrange Film Festival in France and garnered 17 additional awards and seven nominations.

“The Librarian,” one of 20 tales of terror in the Nightmares Unhinged anthology, is a mystery that takes place in a library with three characters: Emma, a new and eager-to-please employee; Wallace Reed, the librarian; and patron No. 136 whose mysterious library routine is artfully played out among the story’s 10 pages.

“It’s just a very simple story with an effective payoff at the end,” Campion said. “I also love the humor in it; many short horror stories can get quite dark and nihilistic, but ‘The Librarian’ is a really fun read and it leaves you with a smile on your face.”

Viola, who before he began his career – first as an artist and video-game developer and then as a writer, editor and owner of Hex Publishers – aspired to be a special-effects artist. While his path turned away from the film industry, he still considers himself a movie buff with a keen eye for quality special-effects.

“His mastery is in special effects,” Viola said of Campion. “I’m really impressed by his work and from an artistic perspective we see eye-to-eye. I was humbled that he saw potential in my short story because I’m a big fan of his films.”

A big fan of “The Devil’s Rock,” Viola reached out to Campion to see if he’d provide an endorsement for an earlier novel “The Bane of Yoto.” Campion praised that book and was among the first to receive an advance copy of “Nightmares Unhinged.” After reading the anthology, he reached out to Viola with an interest in bringing “The Librarian” to the silver screen.

“As a filmmaker I love making monster movies,” Campion said. “And this fits the bill perfectly with a great monster at the end that we’ll be able to create with makeup effects and a great actor bringing the character to life.”

Viola is the third “Nightmares Unhinged” contributor to have his writing optioned for film. Earlier this year, Steve Alten – who penned the foreword for “Nightmares Unhinged” and has served as a writing mentor to Viola – announced his New York Times bestselling sci-fi thriller “MEG: A Novel of Deep Terror” was optioned by Director Eli Roth.

Hex Publishers was founded – fittingly enough – on Halloween 2014. One year later, the Denver-based company debuted its first horror anthology, which quickly rose to the No. 1 spot on the Denver Posts’ paperback fiction bestseller list; produced an animated short with an original score by award-winning composer Otto Cate; and released a “Nightmares Unhinged” PS4 Dynamic Theme feature by Sony – a screensaver of sorts for the PlayStation gaming console.