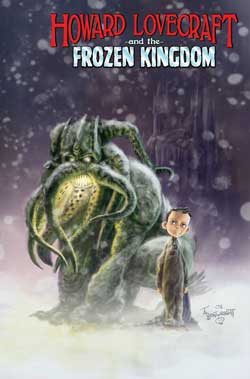 Los Angeles and Vancouver – Shout! Factory, a leading multi-platform entertainment company, and Arcana Studio have entered into a film deal to distribute the new animated feature HOWARD LOVECRAFT AND THE FROZEN KINGDOM in the U.S. and Canada. Film production is currently underway.  Written, directed and produced by Sean Patrick O’Reilly, HOWARD LOVECRAFT AND THE FROZEN KINGDOM is the highly-anticipated movie adaption of Arcana’s popular graphic novel of the same name, and introduces a new generation to the imaginative Lovecraft universe through new storytelling and entertaining animated adventures of a young Howard Lovecraft. The announcement was made today by Shout! Factory’s founders Richard Foos, Bob Emmer and Garson Foos, and filmmaker Sean Patrick O’Reilly, CEO and founder of Arcana Studio.

In this picture deal, Shout! Factory has secured all U.S. rights to the movie, HOWARD LOVECRAFT AND THE FROZEN KINGDOM for digital, broadcast, home entertainment and theatrical distribution, as well as extensive rights for cross-platform releases in Canada. Shout! Factory plans a strategic rollout of this movie on a variety of entertainment distribution platforms and in packaged media in 2016.  Shout! Factory and Arcana Studio will announce the cast in forthcoming months.

“We are very excited to embark on this new Lovecraft animated adventure with Sean and Arcana Studio. Sean and his film production team offer a compelling vision for storytelling, supported with amazing art direction,” said Melissa Boag, Senior Vice President of Kids & Family Entertainment at Shout! Factory. “We look forward to building a multi-generational movie audience across a wide variety of entertainment distribution platforms next year.”

“H.P. Lovecraft’s influence in literature and film cannot be overestimated. Howard Lovecraft And The Frozen Kingdom is a wildly original blend of his fiction and biography, an imaginative and family-friendly tale that will satisfy fans of his literature and thrill kids with an appetite for the spooky and fantastical,” said Shout’s Vice President of Acquisitions Jordan Fields. “This will be quite a ride.”

“The Howard Lovecraft graphic novel series is an award winning gem in our library.  At Comic Con this year we introduced our Cthulhu mascot alongside the Necronomicon and the response was incredible.  We know The Frozen Kingdom increases consumer choice as there are so few Lovecraftian feature films produced, yet so many fans of H.P. Lovecraft’s work,” said Arcana’s Sean Patrick O’Reilly.  “Teaming up with Shout is a dream come true because they are just as passionate as we are!”

Howard Lovecraft And The Frozen Kingdom is a fun and thrilling animated feature-length movie for any Lovecraft fan.  A fantastical, cinematic adventure that entwines new storytelling, events of H.P. Lovecraft’s life, iconic elements of his writings and more!