Home | Dracula FAQ – All That’s Left to Know About the Count from Transylvania Coming Soon!

Dracula FAQ – All That’s Left to Know About the Count from Transylvania Coming Soon! 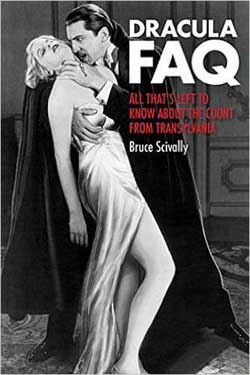 In the 15th century, warlord Vlad III, known as Vlad the Impaler and Dracula (son of the Dragon), became a legendary figure in his native Wallachia. Four hundred years later, Irish author Bram Stoker appropriated Dracula’s name for a vampire novel he spent seven years researching and writing.  Considered one of the classics of Gothic literatures, Dracula went on to inspire numerous stage plays, musicals, movies, and television adaptations.  The character Dracula is a permanent fixture in pop culture.

In Dracula FAQ, author Bruce Scivally unearths little-known facts about both the historical and literary Dracula, covering a abundance of topics along the way, including ancient vampire myths from various cultures; Hamilton Dean, the man who first brought Dracula to the stage in England, and Horace Liveright, the publisher who brought Dracula to Broadway; Dracula in opera and ballet; and Dracula in the comics.

And, of course, Scivally covers the movies, detailing a host of vampire films, from low-budget B-movies from the 60s to documentaries such as In Search of Dracula and box-office hits such as Francis Ford Coppola’s 1992 Dracula.  He also looks at Anne Rice’s book series, The Vampire Chronicles, and the film version of Interview with a Vampire (1994), and at Stephanie Meyer’s Twilight series – the best-selling books and the top-grossing film.

Dracula FAQ is an amazing journey through centuries of vampire history!