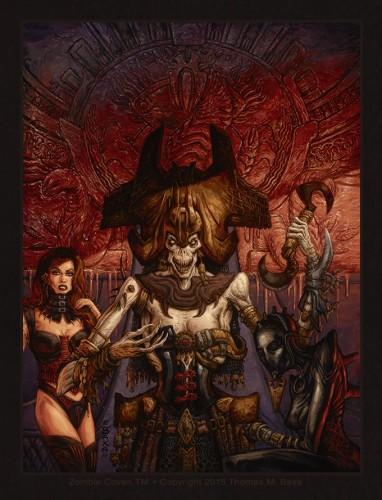 World renowned fantasy artist Tom Baxa writes and illustrates Zombie Coven, a gritty horror novel about an ancient coven of zombies spreading their unholy disease into the dark recesses of the city, ensnaring the lost women trapped there, and eviscerating the men who corrupted them.

Tom Baxa has been creating fantasy creatures that haunt the imagination as an illustrator for over 27 years. His work has a creepy and often disturbing edge that appeals to fantasy and horror fans alike. Baxa has launched a Kickstarter at www.ZombieCoven.com/kickstarter to bring Zombie Coven to life.

“This is a dream project for me. I’ve always wanted to do a full blown, no-holds-barred, horror book with no one looking over my shoulder,” says Baxa. “Zombie Coven is an idea that’s been brewing for a while and it’s exploding onto the page and canvas as you read this.”

Zombie Coven is more than just the typical monster wreaks havoc story. It also explores the human psyche with all of its dark desires, hidden secrets, and flawed belief systems; as well as its potential for goodness, love and connection. But don’t let all this literary talk fool you, Zombie Coven is definitely a horror story full of dread, creepy happenings, inhuman threats, and insanely evil Zombies! 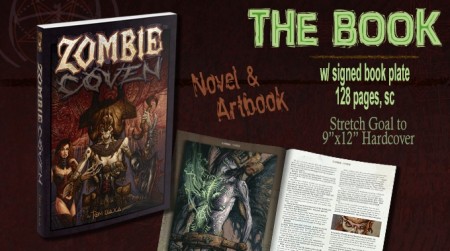 Kickstarter: As Wicked and Raw As You Love It: “Kickstarter is a godsend because it allows artist like myself to do what we do best: delve into our creativity and pull out all kinds of cool, dark, original ideas. No publisher, marketer, or book buyer telling us it’s too dark and it won’t sell. You and I love horror, and together we can make Zombie Coven a reality through Kickstarter.  We don’t need anyone else!” says Baxa.

A Novel and an Art book:  Zombie Coven is an illustrated novel, which means it’s a word filled fiction novel (not a sequential art graphic novel); and it’s also a large format art book filled with pages of jaw-dropping art. Each book comes with a signed bookplate, and there’s even a reward tier to have Baxa do an original sketch inside.

Support horror and the creative arts: join the Kickstarter and be a part of the Zombie Coven!  Check out all the great rewards including: the signed book, original art, prints, zombie statues, an instructional painting dvd, and more at www.ZombieCoven.com/kickstarter.