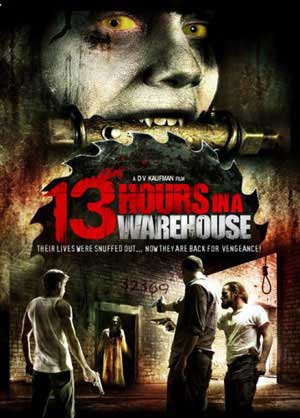 After a successful heist, five thieves hide in an old warehouse for the night. But when a series of mysterious numbers appears on the wall, followed by a bloody attack, they quickly catch on that somebody — or something — doesn’t want them there. Soon, they’re fighting for their lives. Does the clue to survival lie in the strange string of numbers that keep showing up everywhere? Dav Kaufman directs this taut supernatural thriller..

I had received a screener on this anticipated new release, though it came in the mail broken. So I found myself a couple weeks behind in getting to it. A friend had acquired a copy. It was not long after I was able to finally sit thru a viewing. This release from the folks at Maverick turned out to be pretty decent. Not for maybe the reasons your thinking, but for a pretty entertaining script.

In the film written, directed and produced by Dav Kaufamn, we find ourselves in a conversation between a bunch of thugs with the intention of stealing some pretty valuable art. The conversation that takes place has a bit of that Tarantino Reservoir dogs feel mixed in with a dash of Ocean’s 11. All in all if your fan of heists (which I am) then that alone should appeal to your man’s man sense of sitdown evening watching. I’m sure your wondering where the warehouse comes into play? After the heist (yes I like that word) the group meets at a chosen warehouse to lay low for 24 hours (oopps 13)and kills the time with a chit chat around a campfire. So I’ll save all that for your viewing pleasure. However as time progresses a few things happen. A plot within a plot begins to shape and the warehouse seems to be have a couple of vindictive ghosts creeping around. We all knows what happens next, the fury begins to unleash on these thug dudes with some d*ck munching, head splatting, ghost romping good killing time.

Oh ya, they also took in a hostage who happens to spend most of her time locked in a room before hiding and lurking her way into freedom. Though the part is pretty limited to a few lines at best.

Of course the film is not just as simple as ghosts in a warehouse with some reservoir dogs sitting around. A back story is revealed concerning 2 of the brothers father and his shady past. Tension mounts, ghosts creep and the acting gets more and more involved as the film progresses. Its part horror film, part crime drama.

So lets talk about the ghosts first. They have the expected ghost look going on. We know the score…green tints, white clothes, sunken eye makeup (see pics) and in this case a tv interference flicker to help with the ghost factor. Nothing wrong with that, in fact that particular effect makes sense as the story is revealed, which I thought was just for effect. All in all I thought they did a worthy attempt with them. Easily as worthy as a Pulse film for that matter. I would have liked to see a but more play on there vicious nature in the film, but more emphasis was placed on the crime drama.

What do I think of the film? I was cool with it honestly. It kept my attention, the script was interesting and the ghosts did just fine. Did I think it was scary? No, not so much, but scaring folks is an art in itself. So films that don’t scare are ones that haven’t discovered the art as well as others. All in all “13 Hours” is a decent movie and horror fans will dig it.