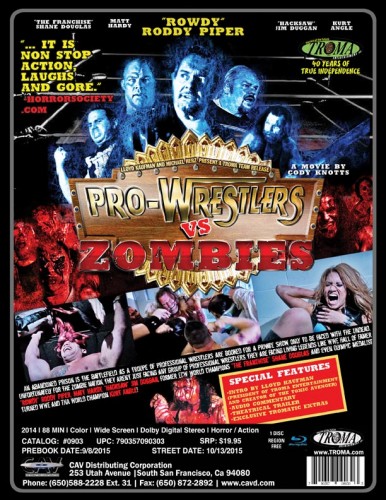 Pro-Wrestlers Vs. Zombies is exactly as it sounds — sports entertainment icons and local ring talent using their signature fighting styles, athleticism and anything they can get their hands on to fend off the undead. An abandoned prison is the battlefield as a troupe of professional wrestlers are booked for a private show, only to be faced with the undead. Unfortunately for the zombie nation, they aren’t just facing any group of professional wrestlers, they are facing living legends like WWE Hall of Famer Rowdy Roddy Piper, Matt Hardy, Hacksaw Jim Duggan, former ECW World champions including The Franchise Shane Douglas and even Olympic medalist turned WWE and TNA World champion Kurt Angle! 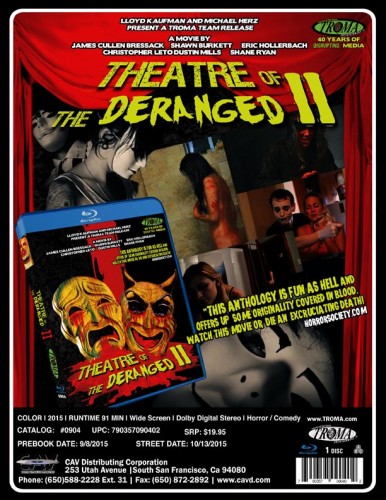 Theatre Of The Deranged II

Andy the Arsonist welcomes everyone to his theater of derange for a wild night of thrills, chills and spills. Andy kick’s off the night by hosting five short horror films from some of the best Horror Writer/Directors in the indie scene. 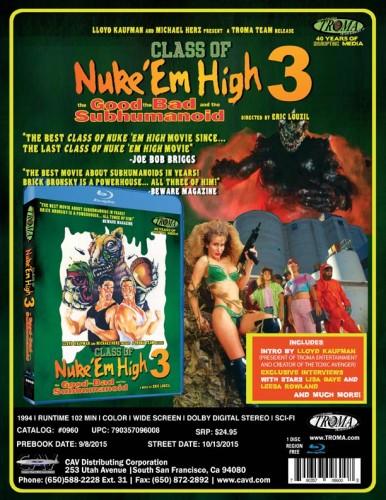 Class Of Nuke ‘Em High III: The Good, The Bad And The Subhumanoid

Welcome back to Tromaville High!!! The only school in the country with a giant nuclear rodent for mascot, detention for melting and a bikini dress code. Wanna Hall Pass? Wanna Bus Pass? Wanna Pass Gas? You won’t pass up the mind-bending special effects! The Tromaville student body is in danger again… and it’s not of flunking. Tromaville is under attack from a subhumanoid army led by the evil Dr. Slag and his perfectly proportioned partner Professor Holt (a woman scientist with really big hair, portrayed by Lisa Gaye). On top of that, TROMIE the Nuclear Rodent is raging mad! 3 times the evil of the original! 3 times the mutated monsters of the sequel! With subhumanoid twins battling for Tromaville, more bodacious babes than ever and 3 times the nuclear meltdowns, it’s all action and excitement in CLASS OF NUKE ‘EM HIGH 3 — The Good, the Bad and the Subhumanoid!