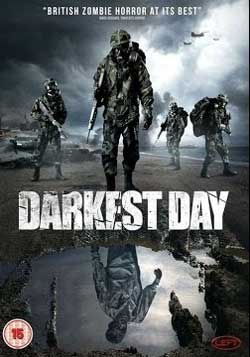 Dan wakes up on a beach with no memory. He discovers an empty city ravaged by a deadly virus. After befriending a small group of survivors it soon becomes clear the army are hunting him down, and the group are forced on a dangerous journey to escape.

There’s nothing particularly unique about Darkest Day. It fits into the growing category of British Zombie films, my favorite of which is 28 Days. Though the word “zombie” is never used (they are referred to as “infected” or having “turned”), in this case, the “zombies” are the victims of a neurological virus. These are not the shambling, off-balanced zombies of Night of the Living Dead or The Walking Dead. Darkest Day’s zombies are raging zombies characterized by throat-tearing screaming and frenzied flailing. They are incredibly fast and relentless once they’ve identified a living, moving, possible source of food.

The story opens with Dan (Dan Rickard) waking up on a deserted beach with no memory of how he got there. He soon discovers a post-apocalyptic world as he wanders through desolate, abandoned streets, littered with rubble and refuse. Luckily, as he picks his way through the city of Brighton, the first people Dan encounters are not infected; they are a pair who are out scavenging for supplies and food for their other seven flat mates.

One of the pair is killed almost immediately after stepping on screen. While Dan and the two scavengers are arguing over whether or not to take Dan with them to their home, a zombie attacks and kills one of the scavengers. Dan and the victim’s companion flee and fight their way back to the group’s shared apartment, where Dan is introduced to the seven remaining housemates. Dan’s entrance is met with resistance by the group’s de facto leader, Sam (Chris Wandell). Another member of the group, Kate (Samantha Bolter), befriends Dan and fills him in on prior events. After the virus quickly started to spread, the military attempted to evacuate everyone who wasn’t infected to a safe camp. As you may be able to guess, the evacuation met with limited success. Kate and her roommates had all separately managed to evade the chaotic evacuation, and since then, had been hiding in the row house / apartment. The current band-of-eight seem to spend most of their waking minutes searching for food and alcohol, avoiding the military, killing the occasional infected who attacks their shelter, or drinking and partying. Hey, what else is there to do?

We soon learn that the military is searching for Dan – he’s a “Level 5” target – though we don’t immediately know why. As the military gets closer and closer to finding Dan, our merry band is forced to vacate their party house / safe haven to avoid discovery and elect to head for James’ grandmother’s farm. As members of the group are killed one-by-one by soldiers or zombies, or become infected, we arrive at a core group of four – Dan, Sam, Kate, and James (Richard ‘WiLX’ Wilkinson). Tension builds as the military closes in and the group learns why the soldiers are pursuing Dan. Decisions must be made.

The only characters we learn any backstory on are Kate and Dan. Even so, Darkest Day has some character arcs of sorts in the development of Chris Wandell’s character, Sam, and in the relationship between Dan Rickard’s and Samantha Bolter’s characters, Dan and Kate. And there is a definite, though severely accelerated, arc in Adrienne Wandell’s character, Adi. 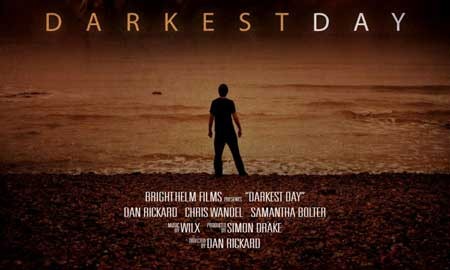 The film has a very gritty and washed-out visual feel, contributing to the depressing atmosphere of the setting. There are a lot of unsteady, hand-held shots, what appear to be some cranked-up frame rates, and a lot of quick cuts. You’d think this might be distracting but it wasn’t. It all adds to the frenetic pace of the action scenes, the frenzied movements of the zombies, and the building tension. And even then, I never had any trouble knowing exactly what had just happened, which is not always the case with many quick-cut action sequences.

Darkest Day is a production of BrightHelm Films, a creation of Dan Rickard, Samantha Bolter, and Simon Drake. According to the film’s website, “although it is a self-funded, micro-budget film, we aim to compete with big-budget films in terms of cinematography, visual effects and music.” One source reported the budget to be £1000. The movie started as a student project while Dan Rickard attended Brighton Film School and was later expanded to a full length project. Rickard, whose prior credits include special effects on The Dead (2010) and The Dead 2: India (2013), is listed in the Darkest Day’s credits as director, co-writer, cinematographer, practical and digital effects, and editor. Many of the other cast and crew were also multi-tasking. For instance, Producer Simon Drake also played Will and served as second unit director and camera operator. Richard Wilkinson, who played James, also composed the score as WiLX. 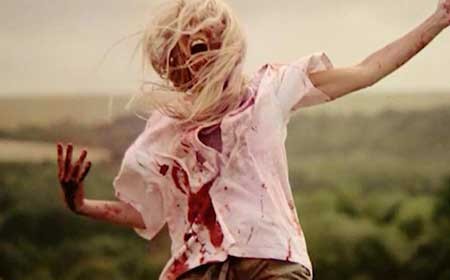 So, nothing particularly unique in terms of story or acting. The strength of Darkest Day is in the cinematography, visual effects, and editing. In the end, all parts fit together fairly well for an enjoyable, tension filled experience. I give Darkest Day 3.5 out of 5 raging zombies.

Darkest Day was released in the UK in May 2015 and is available on Blu-ray and DVD from Amazon.co.uk. 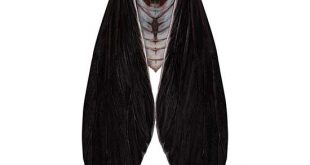