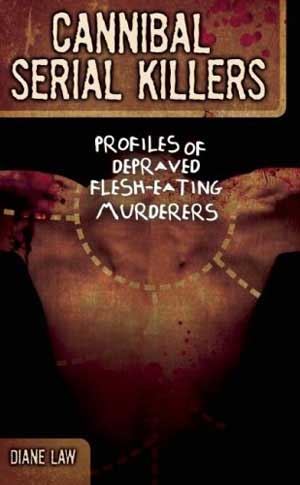 Far removed from the cinema and its fictitious tales of axe wielding, chainsaw hacking and iconic slasher fare are the true horrors of present day realities. Author Diane Law knows too well that monsters do exist and can be as close as next door or someone you know. Whether fiction was inspired from truth or the dark nature of man is always on the brink, these killers and sadists of life do exist and are documented for all to behold. What is it that drives one to kill and serve human flesh. What is it that enjoys life when its taken from others and what is it that goes one step father to desecrate and eat that which they have killed. Is it a spiritual relationship, a powertrip , a form of exotic hunger or just madness.

Society would say it’s all of that and more. This book examines those horrors and the individuals who drive them. Diane Law calls these troubled souls cannibal serial killers, but in fact they are all products of pure evil.

The book chronicles and narrates the stories of these particular brand of criminals. We call them the sickos and the worst of the breed but beyond that the question still remains why? Maybe a collection of these beasts will better help shed light on the phenomenon they hold that taps into the most primal of all man’s darkest moments.

While several deviants of history are recorded in this book, the fascination in these dregs lies in their situations and states of mind that even lead them to cannibalism. One such figure is the chapter on Emperor Bokassa, who was reported to have indulged in human flesh more as a luxury than a necessity. Rich in power and control over much of the nations budget he threw lavish parties, garnished his guests in all the finest the country had to offer and foolishly wasted away most of the countries finances.

Part of this was reports of feasting on human flesh and burying the bones in the basement or yards. His rise to power combined with pure madness in which reports claim in a celebrational coronation a portion of the meal served included a non-disclosed amount of human flesh served to the guests. When locals uprised over the poverty and excess spending, several students were brought into his establishment never to return. Portions of them served at dinner and remaining bits fed to crocodiles. He was later tried by the government for murder, treason embezzlement and cannibalism. In which lack of evidence sentenced him to a much lighter sentence than the accounts made against him.

Well if that warmed you up then I’m sure your ready to hear about Andrei Romanovich Chikatilo. As it is stated, Andrei was far beyond a sick individual. With beginnings that would lead one to believe he’d grow up to be a stellar member of society, he in fact grew into one of the most notoriously brutal killers in history. Each of his victims we not only killed and left for dead but desecrated with sexual organs cut out, eyes cut out and there crotches stabbed to death with a knife in an act of sexual satisfaction. The details though are even more horrendous as the author gives you the full run down of his case.

Each profile paints a more horrendous individual than the last. While several are profiled here, the fact that these men committed such atrocities is the greatest mystery of all. Ed Gein , a famous name is described in detail. His life, his family and his solemn days spent in the hell house of used body parts that served as a primary decor for his residence. These things and more will paint nightmares that don’t wash off easy.

Each story, if you call them that, is articulated and written with a keen pen for detail and educating the readers. Not only are the chapters filled with atrocious acts but as much clarification into the mind of the killer as is available. While it would be wrong to say these killers are fascinating, the details of there crimes and murders provide a nightmarish view of what society is capable of in the wrong hands. As you browse about, a few famous names will sneak there way out, but it was the more obscure that I found even more horrifying in there acts.

Law gives a great collection of villains and madman that might keep you awake longer than you anticipated. Followers of crime and death will love this book and not be able to put it down.