The thriller short garnered 14 awards nomination, including Best Short, from FANtastic Horror Film Festival, a record number of nominations for a short film at this festival.  Nominations were announced via live radio broadcast on the Keith Harris Show on August 19th to fans across the globe.

“Seeking Valentina” follows Benjamin (Ali Bavarian), an Iranian-American writer mourning the loss of his dead wife.  When Valentina (Kristin West), a mysterious and whimsical tenant comes to take up residence in his home and then abruptly disappears, it is for the audience to decide if Valentina is a ghost, a dream, a hallucination or a runaway.  The short was shot in three SoCal counties, over six days and with locations spanning 500 miles.  Seeking Valentina has garnered international attention due to its excellent casting, unique storytelling structure, production value and compelling themes.  Judges of the festival nominated the film for seven acting awards, reflecting its powerhouse ensemble cast, with such familiar faces as Kristin West (Circus of the Dead), Vida Ghaffari (Mind of Mencia) and Srinivasa Kapavarapu (Outrsourced). 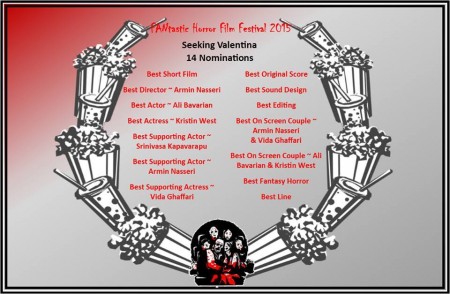 Producer and lead actress Kristin West, upon learning of the nominations said, “We are deeply thankful to the esteemed judges of FANtastic Horror Film Festival for this tremendous recognition of our project.  We are honored just to be nominated among such luminaries in the horror genre.” Unique among horror genre festivals, FANtastic has ongoing fan voting prior to the festival and fans are encouraged to vote for their favorite nominees on the official web page: www.fhffsd.org/

FANtastic Horror Film Festival runs Oct. 30.th through Nov. 1st in San Diego, CA.  FANtastic Horror Film Festivals offers “the opportunity to see films, brand-spanking-new horror, red-hot off the shelf, never seen in San Diego.”  Of Seeking Valentina, film festival runner JoAnn Thomas says, “We are pleased to have a film, like ‘Seeking Valentina’.  This film will not just delight film goers but also addresses important social issues. It’s also a film that leaves the viewer with as many questions as answers, which is unusual and thought provoking.” 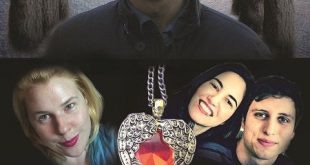