DRAGON DYNASTY
5 MOVIE COLLECTION
Action-Packed Martial Arts Collection Includes Classic Hits
Born to Defense, The Defender,
The Legend II (aka The Legend of Fong Sai Yuk II),
Once Upon a Time in China and America & From Beijing with Love 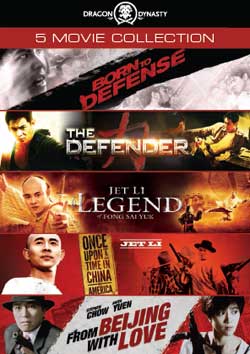 Born to Defense (1986)
Directed by & Starring Jet Li (Rated R, 91 min.)
Jet (Jet Li) is a WWII soldier returning after the war to find he must continue to fight against abusive Americans now taking advantage of citizens in his hometown.

The Defender (1994)
Directed by Corey Yuen & Starring Jet Li (Rated R, 92 min.)
Jet Li – the former bodyguard to the most powerful leader in China is hired to protect school teacher Christy Chung after having witnessed a brutal murder.

The Legend II (aka The Legend of Fong Sai Yuk II, 1993)
Directed by Corey Yuen & Starring Jet Li (Rated R, 92 min.)
Having failed a secret mission for the Red Flowers Society, an underground organization dedicated to the overthrow of the Manchu dynasty and restoration of the Ming Dynasty, Fong Sai Yuk must try to get his hands on a special document by wooing the governor’s daughter.

Once Upon a Time in China and America (1997)
Directed by Sammo Hung Kam-Bo & Starring Jet Li (Not Rated, 99 min.)
Wong Fei-Hung travels to the U.S. to visit a martial arts branch that one of his disciples has set up and ends up establishing himself as a respected kung fu master, helping gain recognition for Chinese martial arts in the West.

Dragon Dynasty 5 Movie Collection will be available on DVD from Anchor Bay Entertainment for the suggested retail price of $19.98

To learn more about this film, please visit anchorbayentertainment.com.