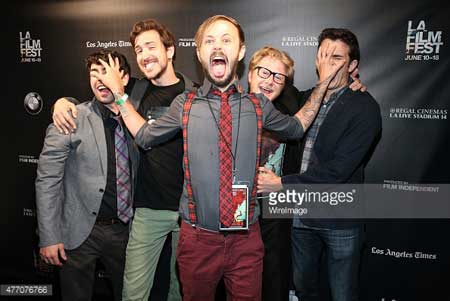 First off tell us what made you want to become a Director?

(JS) I was 8 years old at my grandma’s house, and I heard that an empty shed at the neighbor’s place had caught fire. I realized that by putting my cousin in a monster costume close to the camera and the cabin smoking in the distance, I could make the monster look enormous. From there forward I never considered another career.

(TJ) When I was a young lad I wanted to be a film critic, get paid to watch movies and talk about them, what a dream. Until I saw Evil Dead, then a light came on and I knew I wanted to make them instead of just talking about them.

(MR) I grew up watching and loving a lot of movies as a kid especially horror movies, my parents were very liberal. Originally, I wanted to be a doctor and surgeon –seriously, I would watch surgery’s on TLC (when you actually could learn something), they were pretty gruesome -but eventually the idea of being trusted with someone’s life in my hands was scary and more responsibility than I wanted. I figured I could still cut people open in a movie and not have to worry about it.

What was it like working on and directing “Dude Bro Party Massacre III?

(TJ) I honestly couldn’t have asked for a better first film to have as a Director. I always gravitated to horror and comedy. So making a comedy horror with my best friends was a dream come true.

(JS) It was very 5secondfilms, in that we had to be constantly creative to make things happen on this budget. It’s barely held together with twine and duct tape, but I think that handmade quality adds so much charm to the film, and that was more fun than simply throwing money at problems.

(MR) Working on DBPM3 was a blast! It was just like goofing around doing 5secondfilms but now with an army of friends helping and a budget to blow stuff up! The fact I got to direct a movie that was so absurd, so gory, and so silly was a dream come true. Everyday was hilarious and exciting. 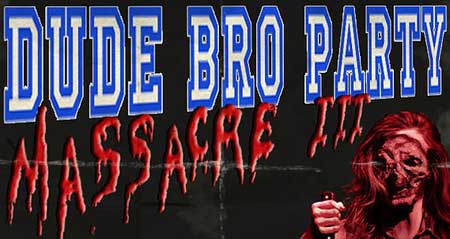 (TJ) Most of them were amazing, total professionals. But Michael Rousselet was a nightmare.

(JS) Michael Rousselet is all of Klaus Kinski’s monstrousness without any of his talent.

(MR) I AM ETERNAL! I AM ENTERAL! TREMBLE BEFORE ME!

The three of you wear many hats including writer and director, which one has been the most challenging for you?

(TJ) We have a death where someone has their stomach cut open and intestines fall out. And it was cheaper to go to a deli and get real pig guts then to rent fake ones. So Rousselet and I are never shy to get our hands dirty, and we ended up wrangling the guts. So I guess keeping lunch down that day was the biggest challenge.

(JS) Not laughing and screwing up the angle during all of Paul Prado’s scenes. I failed often.

(MR) The most challenging thing for me was acting and being a director at the same time. It was difficult acting in a scene and trying to be aware/not be aware of what everyone else is doing in the frame while still being in character. Fortunately, I had Tomm and Jon Salmon behind the camera to keep an eye on things when my character was in a scene. 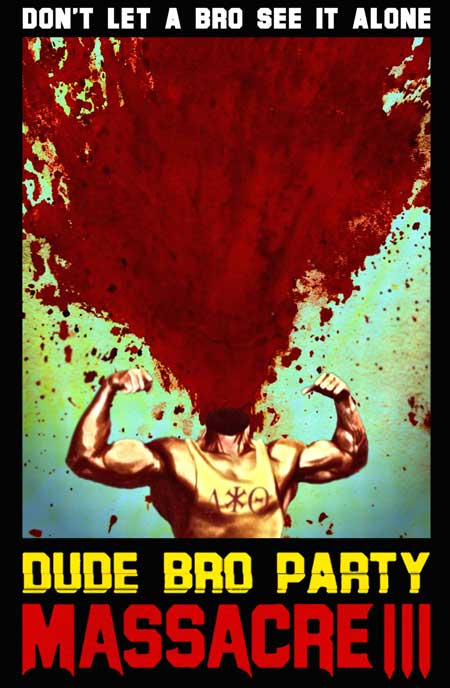 You have an online comedy troupe called 5secondfilms.com, what inspired the online troupe?

(JS) It’s the easiest way to tell the most imaginative jokes with no budget and only your friends as your cast. You can cheat a million things in 5seconds that longer films never could.

(MR) Brian Firenzi came up with 5secondfilms in college at USC back in 2006, he wanted to see if he could tell a story in 5 seconds. I thought he was crazy and the concept of trying to do storytelling in 5 seconds was impossible, then I saw some of the films and said, “I will never leave you alone.” The website started in 2008 and we released a new film every weekday for 5 and half years. We made something like 1,500 films, which amounted to about 4 hours worth of content. It was insane and the greatest film school boot camp of my life.

Who are some of your favorite Directors and what Directors would you like to work with as an actor?

(TJ) Dario Argento, Sam Raimi, Lucio Fulci, Sam Mendes and Richard Donner. I would like Michael Bay to direct me, I think it would turn out AWESOME…explosion.

(MR) The Coen Brothers, Billy Wilder, Werner Herzog, Michael Heneke, Hitchcock, Chaplin, Kubrick, Scorsese and Spielberg, I would love to work with Woody Allan as an actor, we share the same birthday so he has to do it! 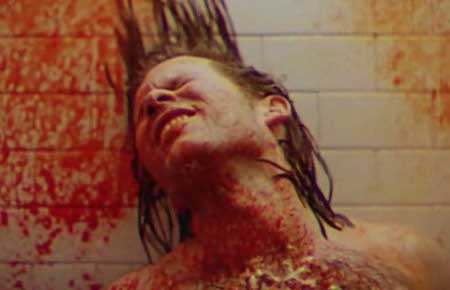 What are your thoughts on some of the new Horror movies out?

(TJ) In the indie world there are some really fun and different films coming out. From the gritty gore films of TROMA to the polished and stylized IT FOLLOWS.  However, the studio system just keep pumping out the same old crap. The “found footage” ghost story needs to disappear into the annals of horrorhistory.

(JS) I do think between the success of movies like It Follows and Babadook, we’re seeing a resurgence of classic 70s modernist horror. I didn’t mind torture p**n when it was Hostel, but I think that genre lost its sense of humor long ago. We tried to make it funny again with our movie.

(MR) Exactly what Tomm said, I don’t know what the last good “studio system” horror movie was. All this found footage crap is so god damn lazy. Independent horror films are the only things with teeth these days.

Who has inspired you personally and professionally?

What advice would you offer to fellow and upcoming directors, actors, producers and writers?

(TJ) Embrace the weird. And when you find that person or persons that you work well with and have similar goals and interests, Stick with them and don’t f**k them over. Making movies is a collaboration. So it helps to trust those around you more than you trust yourself.

(JS) Make stuff often. Don’t be a perfectionist. Write a crap first draft, revise it into something great. No one writes Good Will Hunting on their rough draft. Same goes with directing. Direct sketches, direct Vines, and direct anything. Filmmaking is a language and if you don’t speak it often, you will never get fluent.

(MR) Don’t be afraid to make mistakes, listen to your heart and your gut but more importantly listen to the friends you work with. No matter how hard it gets keep working and don’t forget to have fun, otherwise why the hell did you want to do this in the first place? Also directors/writers listen to your actors, they have to live with a character and might discover something you never considered. 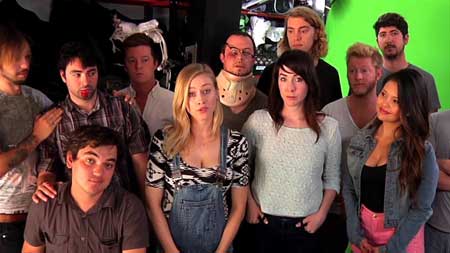 Do you feel it is more difficult to write Horror or comedy?

(TJ) Horror is easy, most of the world has the same fears, or at least can be frightened by the same things. But everyone has a different sense of humor.

(JS) To be honest, I wouldn’t know. We never really wrote horror on this film… we wrote comedy and gore. But I will say a lot more smart work goes into making a stupid comedy than you’d think.

(MR) Comedy is definitely harder. What’s funny to you might not be funny to everyone else. Also when you write a comedy you are basically waiting to see if a joke works 3 years after you wrote it. On the flip side, comedy is easier for character. It’s hard to convince an audience to root for a character in a horror film because it’s assumed everyone is expandable, so why bother getting emotionally attached, whereas in comedy it’s easier to like a character if you are laughing with or at them.

*Dude Bro Party Massacre III is available for download on iTunes and www.dudebropartymassacre3.com 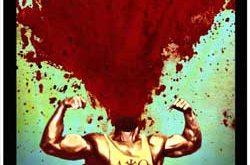