Mark Anderson, a self-absorbed hermit, spends all of his time browsing Echo (a social network). His friends all post beautiful pictures of themselves, constantly reminding Mark of his inferiority to them.

Meanwhile, the otherworldly employees of Echo are creating replicants of users based on their profile information and sending them out to “replace” them.

Mark lives alone. He is unemployed and collects disability insurance for carpal tunnel. Having no need to venture outside, Mark has become quite comfortable living in the world of his home. Everything he needs is brought to him, all by the click of a button (via internet delivery services). Mark suffers from internet addiction – social media in particular. His addiction can best be described as the “repetitive use of pleasurable activities to cope with unmanageable internal conflict, pressure, and stress.” Mark is using his social network status as a means of coping with deeper, self-image issues. His life is plagued by the question, “Who am I, if anyone at all?” He feels inadequate in comparison to his friends, and often doubts his own being.

Have you ever wondered why Facebook requires so much personal information from their users, and what exactly they do with it? There can only be one answer: clones.

As pictured below, much of the inspiration behind the look and feel of Pseudo Man can be attributed to electronic album covers of the 1970’s. Thematically, the film represents a reflection of the selfie generation. Its goal is to examine social media and its effects on individuals and their self image. 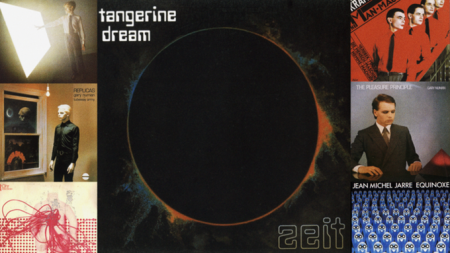 Pseudo Man will be shot in a very old-school manner, with minimal digital manipulation in all areas of production. We plan to shoot on 16mm film using the ARRIFLEX 16 SR3 – the same camera used on films such as Clerks and Black Swan. All the special effects in Pseudo Man are going to be created practically by special makeup effects artists and executed on-camera. We believe that shooting this film “organically” will be a powerful statement in a digital world.