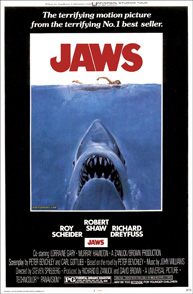 Steven Spielberg’s Jaws, arguably the greatest summer movie ever made, will be screened July 3 through 5, 2015 at Brooklyn’s Nitehawk Cinema. Here are the times and showtimes (if you’re planning on going, get tickets now as Friday’s show is sold out):

Nitehawk’s got a panic on their hands on the Fourth of July – Jaws is coming for a very special matinee on Friday, July 3 and brunch screenings over the weekend complete with  special holiday menu.
Steven Spielberg’s glorious Jaws is the film that defined the blockbuster and has made generations of movie-goers terrified of going into the water. When a giant great white sharks swims into the town of Amityville during the Fourth of July holiday and begins munching on vacationers, it sets off a battle on both land and in the sea. The first half of Jaws is the struggle of New Yorker sheriff Brody is get the mayor on board with the idea that a man-eating shark is cause enough to close the beach. The second half is an adventurous boat trip with Brody,marine biologist “city hands” Hopper, and salty fisherman “chalkboard” Quint as they battle the shark on its own surf. In between, you get a lot of intensely scary moments. Trust us, you’ll never forget the first time you see that shark pop out of the water on the big screen!