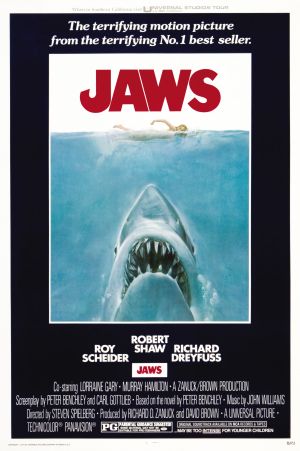 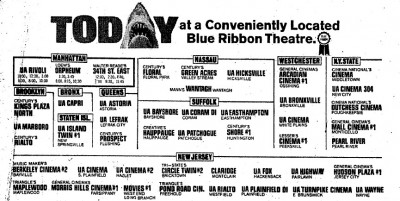 Can it really be forty years since Chrissy Watkins seduced a young man on the beach by stripping off all her clothes and diving into the water and unwittingly into the mouth of a Great White Shark? Jaws, arguably Steven Spielberg’s best film and my vote for The Greatest Summer Movie of All-Time, opened on Friday, June 20th, 1975 to an unsuspecting public on to the then-unheard-of 500 movie screens. To celebrate the release of one of the most successful films of all-time, Universal is re-releasing Jaws on 500 movie screens across the country. The film will be shown on Sunday, June 21 (Father’s Day) and Wednesday, June 24 in selected theaters at selected times.

This is an excellent opportunity to allow young moviegoers to experience one of the cinema’s greatest achievements on a big screen with an audience. From the press release:

Dare to relive the terrifying masterpiece? Fathom Events, Turner Classic Movies and Universal Pictures Home Entertainment invite you to celebrate the 40th Anniversary of the one of the most popular American thrillers of all time when Jaws (1975) returns to select cinemas nationwide for a special two-day only event on Sunday, June 21 and Wednesday, June 24 at 2:00 p.m. and 7:00 p.m. local time.

It’s a hot summer on Amity Island, a small community whose main business is its beaches. When new Sheriff Martin Brody discovers the remains of a shark attack victim, his first inclination is to close the beaches to swimmers. This doesn’t sit well with Mayor Larry Vaughn and several of the local businessmen. Brody backs down to his regret as that weekend a young boy is killed by the predator. The dead boy’s mother puts out a bounty on the shark and Amity is soon swamped with amateur hunters and fisherman hoping to cash in on the reward. A local fisherman with much experience hunting sharks, Quint, offers to hunt down the creature for a hefty fee. Soon Quint, Brody and Matt Hooper from the Oceanographic Institute are at sea hunting the Great White shark. As Brody succinctly surmises after their first encounter with the creature, they’re going to need a bigger boat.

Click here for more information and to order tickets from FathomEvents.com.