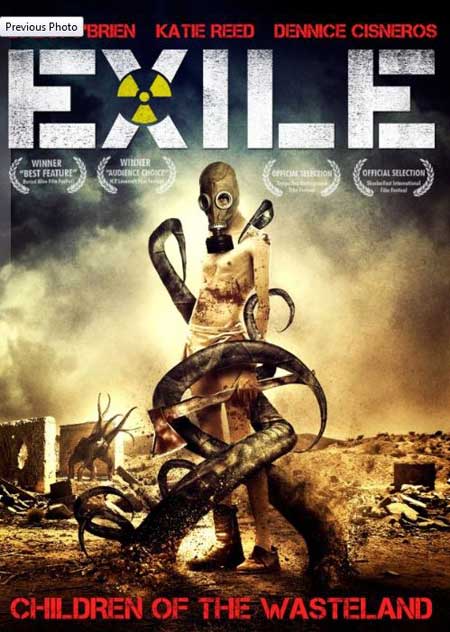 A group of teenagers try to survive in a world that is under the influence of an alien creature referred to as “The Angel.” Things go from bad to worse for them when of them ends up pregnant (which is a bad thing in this new world) and they are forced to fight the alien and her followers in order to stay alive.

There is nothing worse than watching a movie and not really having a clue as to what is going on. In a nutshell that pretty much sums up my feelings toward Exile (aka The Sunderland Experiment). I had an extremely hard time getting into it and an even harder time trying to follow what was going on. I don’t know if I just didn’t get it or what, but I can honestly say that it didn’t make a whole lot of sense to me and by the time it was over I was more than just a little confused. I didn’t have a great time with this movie and couldn’t wait for it to be over the entire time that I was watching it. It is supposed to be some sort of horror/sci-fi film but there were very few elements of horror to it and the sci-fi moments were pretty lacking as well. I looked up some reviews for it online before I watched as I had never heard of it and while the biggest majority of them were pretty positive I have to disagree (to the point that I have to wonder of these reviewers were watching the same movie that I did). I didn’t think that it was remotely interesting or scary, and to be brutally honest I thought that it was a boring, confusing mess of a film that just tried a little too hard in a lot of ways.

One of the biggest problems that I had with the film was the fact that I just didn’t care about the premise. Basically we have a group of teens who live out in the middle of nowhere that are forced to attend school so they can learn about “The Angel,” which is a weird alien with tentacles that has taken over the world. People all over the world worship this alien and are “reborn” by doing so while the others that oppose it are basically exiled from the rest of society. Doesn’t sound too interesting, does it? Believe me when I say that it’s even less interesting than it sounds. I know that some people who are into science fiction might really dig it but others who are more into horror (like me) probably won’t care for it. I was bored to tears by it and just kept sitting there waiting for something awesome and interesting to happen but unfortunately it never quite does. Maybe I am just stupid or something and just didn’t get it like other people apparently have, but I thought that it was a pretty horrible film and that it had an incredibly dull premise (then again I’m not really much of a science fiction guy).

It also didn’t help that the film’s pacing is very plodding and slow. It moves along at a snail’s pace and even though it is relatively short (it only clocks in at around a little under 90 minutes) it seemed to go on for hours upon hours to me. It is painfully devoid of action until the last few minutes when someone faces off against the Angel, but even that isn’t that impressive and only lasts mere moments. If you’re looking for a movie that features a ton of action then take my advice and stay away from this film or you are running the risk of falling asleep while you watch it.

Even though I didn’t really care for any of the characters I will admit that the acting was pretty good for the most part. Dylan O’Brien is really good as the main character David and I can’t help but think that he was a little too good for this part as he is very talented and deserves much better if you ask me. Most of the other actors do an equally decent job as well, and even though their acting was top-notch I just didn’t care for any of the characters that they played as I found them to be boring and unlikable. The only one that I almost liked was one of David’s slow-witted, cross-eyed classmates that provided a lot of (unintentional) humor. Even though I wasn’t supposed to I couldn’t help but laugh every single time he was on screen (especially the bit where he is sitting in the classroom asking over and over again where the instructor is much to the chagrin of his classmates) and I wish that he had been used a little more as I thought that he was the best character in the entire movie.

I just wasn’t that big on Exile. I had an extremely hard time getting into it and thought that it just wasn’t a very good movie in general. As I said before maybe I am just a moron and didn’t get it and in reality it is one of the most brilliant and thought-provoking films to come along in a long time but I have my serious doubts. Unless you are a fan of films such as 2008’s Scars of Youth and similar films you won’t most likely won’t enjoy Exile. I thought that it was pretty bad but then again I was obviously not the target audience for it so you may absolutely love it. Check it out if it sounds like a good time to you, but keep in mind that unless you are a hardcore science fiction fan you are pretty much wasting your time.