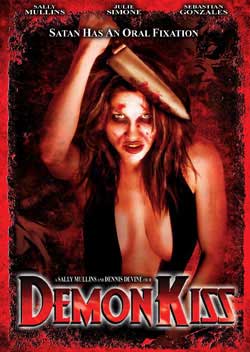 An attempt to summon a demon using the sacrifice of a prostitute misfires – the evil entity instead possesses the body of the intended victim! With the ability to leap between hosts, how can it be stopped before it tracks down its target?

Starring: Sally Mullins, Jessica T. Perez, Denisse Bon, Thomas Michael Clemons, Sally Fay Dalton Prostitution is illegal, but sometimes necessary when young women have no other options when desperate for money. Being able to pursue a career making up to a couple thousand an hour through prostitution can make a fast food minimum wage salary look like a waste of time. In Dennis Devine’s “Demon Kiss,” a group of call girls from a website must not only deal with the stress of having an illegal profession, but also deal with a demonic spirit that is spread by a simple kiss.

The film begins with one of the escorts, Amanda Saints(Jessica T. Perez), introducing her scandalous life of being a prostitute. She claims the internet is the new venue for escort hookups, and shows her emailing back and forth with a gentleman knows as D-man(Vito Trabucco). Suddenly, we are shown another escort, Tiffany(Shannon Lee) walking towards D-man’s apartment. She walks in, and D-man is forceful with his demands of her to handcuff herself to the bed. When they in a twist are handcuffed together, D-man starts to conjure up a demonic spirit through a spell, and the spirit enters Tiffany. After stabbing D-man in the eye, the spirit stays in Tiffany, Next scene cuts to Dr. Virginia Lacy(Sally Mullins), a compassionate psychologist that works with prostitutes. She is having a session with Amanda, where Amanda admits her destiny is to be a famous prostitute. After their session, Dr. Lacy is called to the crime scene where Tiffany is still handcuffed to a dead D-man. Tiffany is still possessed, and has a different demeanor, as she tilts her head back and whistles nonchalantly into the sky. She refuses to talk to Dr. Lacy, and claims she is looking for the mother of all whores. She also demands to see Lieutenant Smith(Jamie Macek), and all the other investigators leave the room. We are first shown how the demonic spirit travels from body to body, when Tiffany kisses Smith, and he is then possessed by the demonic demeanor.

Lieutenant Smith overtakes the mission of the demonic spirit, as he visits a website called HeavenlyBodies.com pinpointing Amanda Saints. Smith’s mission while being possessed is to find Amanda, and overtake her body. His only solution to find her is going through the other escorts on the site. Of course, this is deadly for the other escorts, as he savagely kills each girl through many different brutal ways. Meanwhile, Dr. Lacy attempts to save the fates of the girls by meeting up with the owner of the website, Lucinda Garrett(Jennifer Kamstock), and trying to get as much information about why this man would want to find Amanda. The race is on when Amanda goes out of commission to hide from the killings, but is inclined to get back into it after her boss convinces her otherwise. The results are deadly when the demonic spirit gets closer to finding its desired home, in Amanda’s body.

“Demon Kiss” is filled with plenty of female full frontal nudity, blood, and graphic killing scenes to please the male horror viewers of the film. The killing scenes include: a broom stick through a woman’s body, a hand through a woman’s face, and a decapitation with fake blood spurting out. The kills were really low budget, as the props used looked cheap and not very well detailed. The big-breasted women that made up most of the cast were not afraid to prance around naked in the movie, and made their characters believable as prostitutes.

Dennis Devine’s “Demon Kiss” is a deadly race involving beautiful prostitutes and a demonic sprit hell-bent on possessing the so-called “queen of the whores.” I enjoyed the film for the most part, even though I felt the ending was not as good as it could have been. The death of the demonic spirit seems impossible throughout the ending, but seemed silly that the spirit could be ended by killing the body in which it possesses. “Demon Kiss” is definitely a film to watch if one desires lots of full frontal female nudity, along with a dramatic chase to end a malicious demonic spirit.