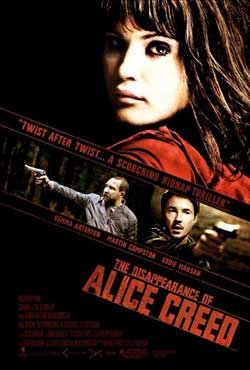 Two men fortify a nondescript British apartment so it can serve as a prison, and then kidnap a woman and tie her to a bed. Before there’s even time to react, we’re plunged into a very nasty situation, but not a simple one

Let me start right off by saying this film is not at all what it seems, and that is meant as a compliment in every sense of the word. It takes the old cliché that “appearances can be deceiving” and takes it to a whole new level. What we have here is not a horror movie, but a contained thriller. One, by the way, that will keep you guessing to the end. This is one of those movies that’s hard to write a review for because you are afraid that one slip of the keyboard and you’ll give away all the twists.

The movie starts off with no dialogue for several minutes, just sequences of two men (Vic and Danny) getting ready to do a very bad thing. They are methodical, grabbing a drill, saw and a sash cord from a hardware store. They are seen digging a hole deep in the woods, stripping and preparing a van for their victim and prepping an apartment by boarding up the windows, putting locks upon locks on the doors and soundproofing the bedroom.

Just watching this builds an incredible amount of tension, and it is a testament to J Blakeson (who also wrote The Descent 2) that he is able to even put a quick bit of humor in as one of the men, while shopping for the perfect mattress, tests it out by bouncing up and down on it.

As their plan is put into motion, you’re worst fears are confirmed. They kidnap a young woman (Alice) and take her back to the apartment. They tie her to the bed, strip her down and gag her. They take pictures of her as she lays naked and terrified. And that is the part in the movie where any pre-conceived notions you may have had about what will happen next will be tossed out the window.

Director J Blakeson (Variety named him one of the 10 directors to watch in 2010) does a masterful job at creating some intense scenes. One sequence that absolutely shines revolves around a bullet. That’s right, a single bullet. I won’t give anything away, but to mix suspense and humor and do it so effortlessly left me amazed.

The cast is absolutely superb. Gemma Arterton gives a command performance as Alice Creed (Prince of Persia: The Sands Of Time and Clash Of The Titans), the kidnap victim. After seeing this movie it is no wonder that Empire magazine listed her as one of the upcoming stars of 2010. Her range of emotions are incredible, to say the least, and she can turn those emotions on a dime.

Eddie Marsan plays Vic, the alpha male and brains behind the scheme. An accomplished actor whose credits are way too many to list here, brings an incredible amount of intensity to the role. Cold and ruthless and always in control.

Martin Compston plays his partner in crime, Danny. He is more subdued and soft-spoken, and dutifully does what Vic orders him to do. Martin plays this perfectly, and one of the great things about the movie is to watch the dynamic between these two men as the plot unfolds.

This film draws you in quickly and wastes no time getting down and dirty. I haven’t been this surprised by a film in a long time. The writing, directing and acting are all top-notch. It is rare that a film this intense can deliver genuine moments of humor that aren’t forced, but derive naturally from the events and the characters. But don’t get me wrong. While the humor is there in small doses, the tension never goes away and before the chuckle disappears from your mouth you are thrust right back into the cold reality unfolding before you on the screen.

Do yourself a favor and try to catch this one before its release on dvd and blu-ray November 23rd. Some cable companies have this on demand right now. All I can say is that you won’t be disappointed.

Tags The Disappearance Of Alice Creed