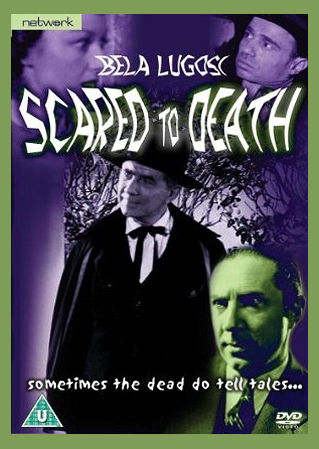 SYNOPSIS:
“From a slab in the morgue, a dead young woman tells the bizarre tale of how she got there, through a maze of murder involving a hypnotist, a midget and a mysterious figure in a blue mask.” (courtesy IMDB)

REVIEW:
This week I’m discussing a rare treat, if not a particularly good one. This week I’m reviewing Bela Lugosi‘s only colour horror film. I’m using the terms loosely here – ‘colour’, ‘horror’ and ‘film’ – Scared To Death (1947). Scared To Death is an interesting film for two reasons. The first and most obvious one, is that it’s Bela Lugosi’s only colour horror film. Secondly, it’s the first film to be narrated by a dead character. Not just that, a psychic dead character who can remember scenes in which she wasn’t present. How about that! I mean, a dead person narrating is avant garde enough, but a dead narrator with clairvoyance? Wow! 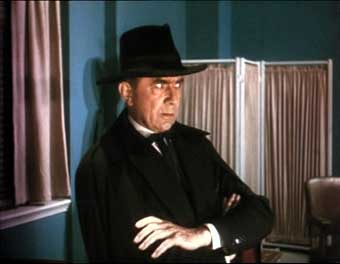 Billy Wilder tried the same trick in Sunset Boulevard (1950) three years later, but even he wasn’t daring enough to give his main character clairvoyance, whether they were alive or dead. Christy Cabanne, the director of Scared To Death, was obviously onto something – or on something. Bela Lugosi makes sure you know it’s Bela by sweeping around with his cape all the time. It was a bad habit of his, and he was barred entry into many antique shops.

But there is another giant of fantasy film that tends to be overlooked when Scared To Death is discussed. Did I say ‘giant’? I mean ‘dwarf’. Yes, Bela Lugosi’s lip-reading dwarf with the attitude problem, Indigo, appeared in one of the major science fiction trilogies of all time. I’m speaking, of course, of Kenny Baker! No I’m not – fooled you! Kenny Baker was only thirteen years old when this film was made. I’m talking, of course, of Angelo Rossitto, who was the Master half of Master-Blaster in Mad Max III Beyond Thunderdome (1985). He also played Klang in H.R. Pufnstuf (1971), for those of you who are indeed ‘pufnstuf’. But his career goes back to being one of Tod Browning’s Freaks (1932). Sadly he passed away in 1991, but he will be remembered through such films as Galaxina (1980), Little Cigars (1973), and one of my all-time favourites, Hellzapoppin (1941).

Nat Pendleton delivers a sensitive portrayal of big Bill ‘Bull’ Raymond. Nat played against Abbott and Costello in the Buck Private films which, at the time, was not considered a sexual position – I’m so sorry I said that. Molly Lamont, who plays the corpse narrator as if she was born to the role, was South African and that’s about as interesting as she gets. Then there’s Roland Varno, who plays her husband. He was famous for such films as Return Of The Vampire (1944), Three Live Ghosts (1936) and Hitler’s Children (1943), for his stirring role of ‘uncredited’.

So, now to Bela. For those of you who have made it this far and still don’t know about Bela Lugosi, I’m not going to help you. Instead, why not rent Ed Wood (1994) and watch Martin Landau’s Oscar-winning performance as Lugosi. In fact, do it right now! Go on! Get up off the couch, go to the video store…no, wait. Sorry, it’ll just make your head hurt – more. Lugosi had effectively peaked with Dracula (1931) and was on a slow spiral downwards that would end ultimately with Ed Wood in Glen Or Glenda (1953), and his last performance in Plan Nine From Outer Space (1959), where he died after a single scene and was replaced with a much taller chiropractor who held his cape in front of his face to enhance the illusion. By this time Lugosi and I were no longer on speaking terms. His constant need for ‘medicine’ and cash had drained me dry – I was finding him a real bloodsucker.

On the other hand I never had a problem with George Zucco, even after he was institutionalised. He had a hard time separating his real life with his work, and became convinced he was actually a mad scientist. Still, it was Hollywood and he could continue to get work. It wasn’t until he tried to graft the head of a dalmatian onto the body of his wife that they committed him. I went to visit him in the asylum but apparently that was a little counterproductive.

Don’t you hate it when they give the last line of the film away in the title? Anyway, please return next week to witness the awe-inspiring terror that is Crypt Of The Living Dead (1972). Though, if they’re living, why do they need a crypt? Wouldn’t a bungalow do? Anyway, toodles! 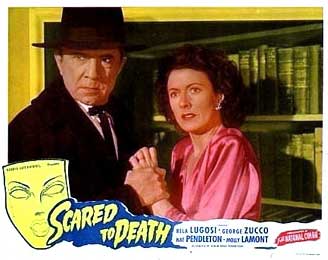