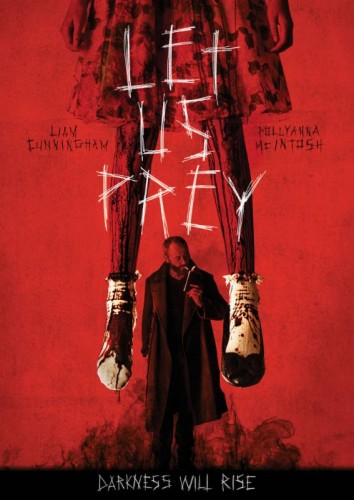 Held in a remote police station, a mysterious stranger takes over the minds and souls of everyone inside.

I’m so excited, I don’t know where to begin.

Perusing reviews from recent months, one could understandably surmise that yours truly must hate horror movies. Rest assured, there is nothing that would warm the c**kles of this heart more than for every link on our humble site bearing my name to be a song of praise. Of course, this would require the majority of films that come across the HorrorNews desk to either not exist or be made by entirely different individuals.

Hence the reason behind my delighted rambling, “Let Us Prey.” This Irish/Scottish co-production begins deceptively uncomplicated, involving a group of people in a single setting over the course of one night. All are harboring dark secrets they wish to remain hidden, until an enigmatic stranger arrives to ensure that the sinners will reap what they’ve sewn. Sound fairly derivative thus far? In fact, this vague synopsis could easily be describing the first half of Stephen King’s 1999 mini-series “Storm of the Century” without even mentioning that the location happens to be a rural village police station.

Familiarity being an attribute of film we must begrudgingly accept in this era of sequels and remakes, damning a picture for lack of originality in plot has replaced “the book was better” as the cheap go-to bitch of the malcontent. The important aspect is how a narrative advances beyond premise, and “Prey” does not disappoint on that front.  Director Brian O’Malley, working from a script by David Cairns and Fiona Watson, has constructed a three-act morality tale that builds from bleakly atmospheric to utterly batshit throughout its course. This is one fun flick.

Afer a breathtaking opening credit sequence that would promote the most substandard offering to the ranks of mediocrity regardless of whatever followed, we are introduced to Officer Rachel Heggie as she prepares for her first night on patrol. Pollyanna McIntosh, the unforgettable title role in the Lucky McKee adaptation of Ketchum’s “The Woman,” is compelling here as the exacting policewoman. Her by-the-book approach doesn’t impress fellow constables Warnock or Mundie (Bryan Larkin and Hanna Stanbridge), both of whom would rather be enjoying a clandestine round of Hide the Sausage in their squad car than filling out paperwork.  The trio is overseen by Sergeant MacReady, portrayed by Douglas Russell from “Outpost: Rise of the Spetsnaz.”

Delinquent youth Caesar (Brian Vernel) is Rachel’s first collar after she witnesses him hit a pedestrian while speeding through the town’s streets. The victim is nowhere to be found, until Warnock and Mundie spot the man post-rendezvous and bring him in to the precinct. Veteran supporting player Liam Cunningham gained notice in 2002’s “Dog Soldiers,” and has since found employment in nearly every movie and television show that costumes actors in chain mail. He’s mesmerizing as the mystery man known only as Six, initially silent but possessing a strange control over everyone present.

It isn’t long before Six finally speaks while being examined by Dr. Hume (Niall Greig Fulton), causing the local practitioner to attack him with scissors. The cops intervene and place both men in holding cells, the charge against Six being vagrancy until they can ascertain his true identity. Alone with the other prisoners, one of whom a teacher who’d beaten his wife and caused her to miscarry, Six incorporates a brilliant bit of foreshadowing into three words for his fellow incarcerated: “So, who’s first?”

Despite a moment or two of detective work from Rachel that reveals nothing we haven’t already figured out, “Prey” escalates rapidly from there. A visit to Dr. Hume’s residence to inform his family of the arrest leads to a shocking discovery, and a side trip by MacCready to gather information on Six proves to be an excuse for him to mask his own misdeeds. Soon, everyone’s formerly closet-dwelling skeletons are paraded out in full, gruesome detail.

That’s all you’ll be getting from me, friends. To provide any further particulars would be as blasphemous as it is impossible, for “Prey” jumps the rails into the final third in ways that are inexplicable to the point of defying coherent description.  This gradual transition from moody tension to unhinged insanity will be tough to swallow for some, and you’ll get no argument here that it’s unapologetically excessive. Personally, I adored the sheer over-the-top moxie of it all, every new turn of events nuttier than the last.

Buoyed by a strong script and excellent performances, O’Malley has crafted something special in terms of framing and pace with his first full-length feature. Scenes that would lag and instigate bathroom breaks in less talented hands flow with the action seamlessly, as do a couple of lapses in Rachel’s judgment that will likely go unnoticed by those not writing reviews after watching. Every production member is deserving of accolades, but I would be remiss without mentioning the musical score. Taking an electronic cue from John Carpenter’s earlier works, composer Steve Lynch perfectly captures a claustrophobic vibe that graces “Prey” with a timeless quality one wouldn’t otherwise associate with it.

The muddled ending feels as if a component or two might have been left on the editing room floor, but that hardly distracts from the gonzo spectacle that preceded it. If you’re at all like me, you’ll be too giddy to give a rat’s ass how they wrap the thing up anyway. I’m not certain “Let Us Prey” cares either. The goal is to entertain, not to enlighten. In that respect, mission very much accomplished.  Great stuff.