SHOCK CORRIDOR Screening at the Nitehawk 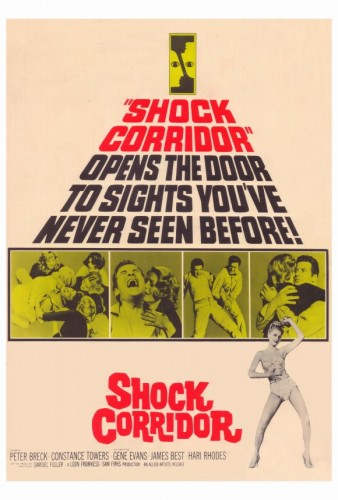 A journalist seeking a Pulitzer Prize commits himself into a mental institution in Samuel Fuller’s SHOCK CORRIDOR. Presented in 35mm (courtesy of the UCLA Film and Television Archive ) with special guests to be announced!

In Samuel Fuller’s Shock Corridor, journalist Johnny Barret concocts an elaborate scheme to fake his way inside a mental institution (he’s fighting an attraction to his sister who is really his stripper girlfriend) in order to uncover the truth behind an unsolved murder and win a Pulitzer Prize. Provocative for its release in the 1960s, not only does the film include innovative camera angles and sequences (taking place nearly exclusively within the institutional walls) but it also dives into issues such as racism, incest, and mental illness. Shock Corridor also masterfully explores the very fine line between madness and insanity as the journey of our main character leads to very unexpected, and electric, places.

Preserved by UCLA Film & Television Archive with funding provided by the Hollywood Foreign Press Association and The Film Foundation.

Go to www.nitehawkcinema.com/movie/shock-corridor/ for more information