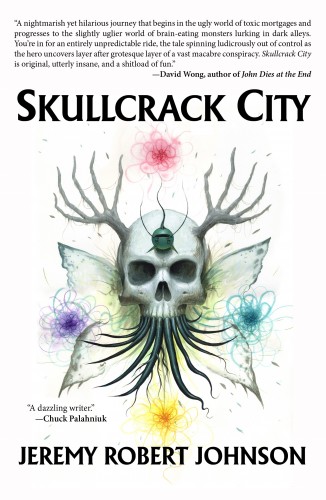 Let me start off by making something abundantly clear – I am a huge fan of Jeremy Robert Johnson’s writing. My first encounter with this three-named serial killer of words was within the pages of The Bizarro Starter Kit (Orange), where I read his novella Extinction Journals (this is the same place I first found the work of D. Harlan Wilson, another of my favorites). This was a story about a guy who essentially survives a nuclear holocaust thanks to his homemade suit covered in cockroaches. Think about that premise for a moment, it’s kind of genius. (Sidenote: the very first short story I personally ever got published used the last line of Extinction Journals as its opening line and went elsewhere; yes, as I mentioned, I’m a big fan of this man’s writing.) I moved on to his short story collections, Angel Dust Apocalypse and We Live Inside You, and I was completely sold. This guy’s storytelling is the real thing. This is all just a really long intro to get to Johnson’s newest work: Skullcrack City.

Imagine if Linda Litzke (Frances McDormand’s character in Burn After Reading) found that disk of a CIA agent’s memoirs, but in the world of Cronenberg’s eXistenZ, and you’re on your way to the insanity of Skullcrack City. Now add in scarabs that rid a body of the leftover drugs that act as tracking devices, ex-Nazi scientists, bursting eyes, enormous beasts that have a taste for brains, and an underground group of rebels that reassure Doyle that maybe he’s not crazy (well, not completely), and you’ve got a few more pieces of this mastermind’s puzzle. But just combining existing works in various combinations, no matter how crazy, will still never form a full picture of this novel, because none of them have a direct line to Jeremy Robert Johnson’s brain.

Skullcrack City is full of all of the good things that this author has already shown in short form, but now expanded across a full length novel: super smart writing, crazy twists and turns that are never too crazy to believe (but enough twists and turns that leave me hesitant to go too in depth into the story itself for fear of spoiling something for a new reader), and plenty of evidence of deep research. This book is a little bit science fiction, a little bit horror, a little bit everything really, with a dark, literary angle throughout. It’s a must for fans of body horror (see the Cronenberg reference), intricate conspiracies, David Wong/Don Coscarelli’s John Dies at the End (Wong even has a blurb on the front cover), or just plain great story-telling.

If you’re a fan of Jeremy Robert Johnson’s shorter work, you already know you’re going to love this book. If you’ve never read anything of his, jump right in with Skullcrack City. If you normally read horror or sci-fi or bizarro, or if you’re a fan of Philip K. Dick or Chuck Palanhniuk, you’re bound to be a fan of Johnson’s work. But just remember, once you delve into this world, leave your cell phone at the door and abandon all ties to what you once thought was real, because there’s no turning back.