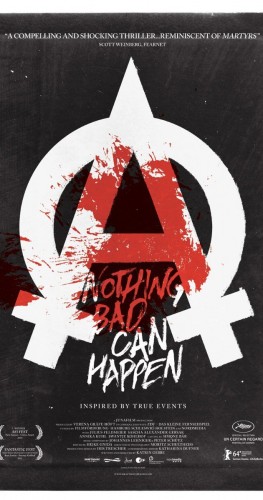 The young Tore seeks in Hamburg a new life among the religious group called The Jesus Freaks. When he by accident meets a family and helps them to repair their car, he believes that a heavenly wonder has helped him. He starts a friendship with the father of the family, Benno. Soon he moves in with them at their garden plot, not knowing what cruelty is there to come. True to his religious belief he stays with them although the increasing violence by Benno is torturing him. Tore is fighting the torment with his own weapons. So a dangerous struggle between libidinous actions and altruism begins. Inspired by true events.

After its controversial debut at the Cannes Film Festival in 2013, writer/director Katrin Gebbe’s NOTHING BAD CAN HAPPEN has found its way to our shores courtesy of Drafthouse Films. I have several things to say about the film, all good, but I will warn you, it’s based on a true story and some of the things that happen in the film are far more horrifying than anything we will ever see in a SAW film or the next FRIDAY THE 13TH sequel. It’s a truly powerful experience and it also manages to be a film I never want to see again. Two films in recent memory I felt the same about were THE GIRL NEXT DOOR (the Jack Ketchum one) and RED, WHITE, AND BLUE. It features several fantastic performances, a compelling story, and an abundance of human nastiness. 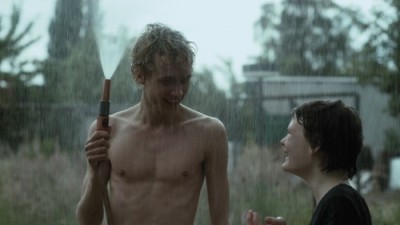 Tore (Julius Feldmeier) is a simple young man who strongly believes in the lord. He lives by his words and belongs to a group of like minded individuals known as the “Jesus Freaks”. These are all young kids who have created their own way of showing worship. One afternoon, Benno (Sascha Alexander Gersak) and his family have trouble with their vehicle and Tore and his friends decide to help. He stands over the hood, delivers a prayer, and miraculously the truck starts right up when Benno tries it. Later, while at one of their punk rock sermons, Tore has a severe epileptic seizure and he falls to the ground, right in the middle of the manic dancing of the young “Jesus Freaks”. Benno shows up and saves him, taking him to his house to relax. Days later, Tore finds himself living as if he’s a part of the family. He helps with the chores and tends to the garden in exchange for food and a tent in the yard for him to stay in. Tore and Benno grow close, almost as if they were father and son. Slowly things begin to change when he notices odd advances Benno takes toward his stepdaughter Sanny (Swantje Kohlhof). If that wasn’t enough, Benno socks him in the face accidently (?) when it appears that Tore is trying to one up him when giving Sanny a birthday present. Thus begins the downward spiral of a young man with a giant heart who is taken advantage of and put through the most hideous of ordeals, a humiliation no person should ever have to endure.

NOTHING BAD CAN HAPPEN has me torn. It’s without question a gripping tale, one ripped directly from the headlines by director Katrin Gebbe. In her feature debut she manages to tear your heart out while watching just how hideous people can be. It’s also a tale of faith. Tore is a character who will never shake his beliefs and the reason he continues to allow himself to be tortured is because he feels this is all just the Lord testing him. He also has very strong (with a naive innocence) feelings towards Sanny and wants to save her from the evil she must face. Gebbe never once flinches and isn’t afraid to punch you as hard as she can in the gut, knocking the wind out of you. The only problem is when it’s all over, you feel dirty, like scum who needs to scour themselves clean. 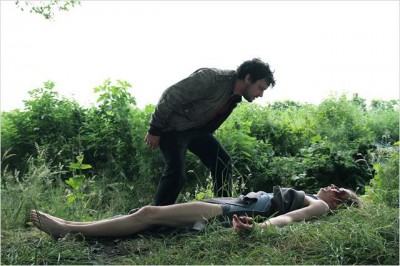 Gebbe has an incredibly strong voice with a clear cut vision of how to deliver a strong message. The message in NOTHING BAD CAN HAPPEN isn’t always clear but the brilliant performances will leave you breathless. Drafthouse Films is known for acquiring daring pictures and this German language feature is no exception. It’s almost impossible to put a star rating to a film like this since I was equally blown away by and repulsed all at the same time. To be fair to the film, I’m giving it ***** (out of 5) but I doubt I will ever watch it again.