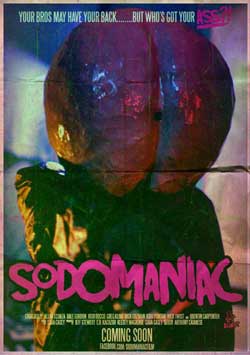 Sodomaniac, is a no-budget B-movie, bold in title and in comedic vision

Looking for the next cult classic to wow your horror movie buddies with? Have no fear, Sodomaniac is here! This is director Anthony Catanese’s full-length film debut after a handful of shorts and a music video. On the movie’s Facebook page, the director says he’s a “humble graduate of Troma U,” and describes his movie as “Harmony Korine meets Wes Craven meets John Waters meets Lloyd Kaufman meets Kevin Smith.” It’s hard to argue with that description, but I would add one thing: it’s all of that, with a healthy (or maybe unhealthy) dose of Ryan Nicholson’s Gutterballs sprinkled throughout. 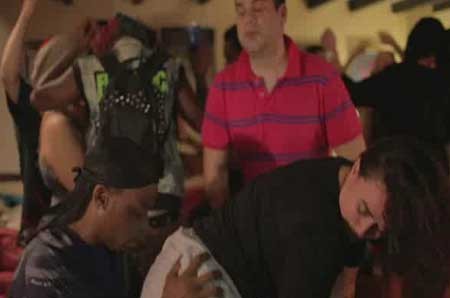 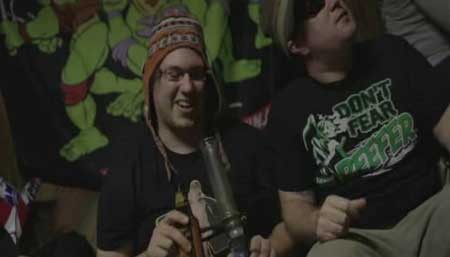 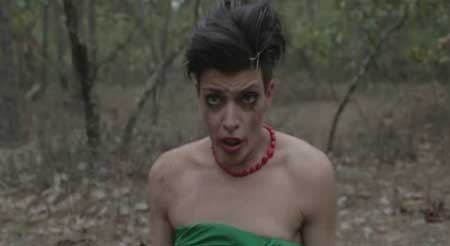 Meet “The Wolfpack,” a group of dude-bro douchebags who have only one big thing in common – they all kinda suck. We first catch up with them at a crowded bar, where they talk smack about women they’ve had sex with while scoping out their night’s conquests. They meet some girls, drug some drinks, and pretty soon we watch as a confused girl wakes up in what looks like a frat house, P*rn laying around everywhere, and a bunch of dudes laughing about they were ALL with her the night before. Yep, those are the type of dudes we’re dealing with, and so it’s difficult to not root for the killer walking around with a butt mask, killing them one by one via vicious anal rape.

Yes, you understood that correctly; the killer in this movie wears a mask that looks like a butt and kills frat boys one by one by anally penetrating them with some kind of electric, chainsaw-sounding phallus. If you’re easily offended, now’s probably a good time to head for the doors, although I will say there is some semblance of a message underneath it all. If only bad people are killed, is that killing still considered wrong? In the world of Sodomaniac, it’s probably still wrong, but it’s also pretty funny.

I’ll go out on a pretty sturdy limb and say that this movie reminds me of Terror Firmer meets the afore-mentioned Gutterballs. And it’s not just because the killer in Sodomaniac reminds me of BBK or the psycho killer terror-izing the Troma set. It’s the style, the dark humor playing side by side with the gore-coated violence. It’s the lowbrow humor (I’m not saying that’s a bad thing), the stereotypes the bros fit perfectly into, the cast of tertiary characters that help round out the scenes. And most importantly, it’s because it really is a lot of fun. 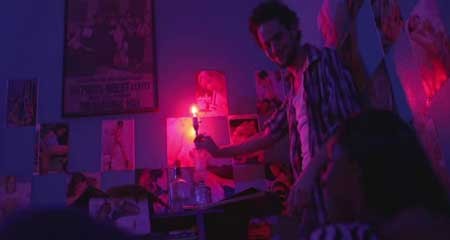 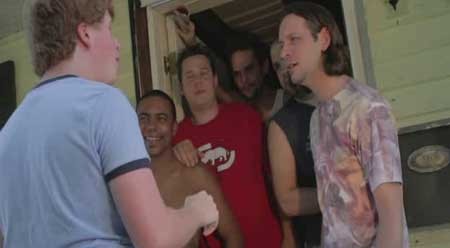 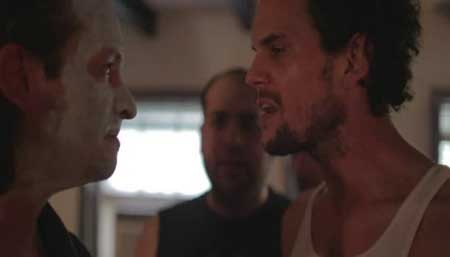 Sodomaniac, in case you couldn’t tell by the title, is a movie that does not take itself too seriously. That is obvious from the very first scene, where we have a guy bent over, his culo ripped up and trailing chunks of blood. Cops arrive on the scene, and the rookie immediately pukes, as rookie cops are wont to do in your typical Hollywood thriller. The other cop turns to the camera, Zack Morris-style, and responds to his partner’s question of who could have done such a thing – a Sodomaniac.

For such a low-budget movie, the acting is surprisingly well done. You don’t feel like anyone is there against their will, like in some underground horror duds. No super familiar names here, it looks like it’s just a bunch of people who wanted to make a fun movie. The kills are each unique and effective, plenty of red splattering everywhere (as well as some occasional brown – we are dealing with the butthole here, remember). There is a bit of a twist, one you probably won’t see coming that might seem a bit of a stretch, but it still makes more sense than some of the Scream franchise’s endings.

Sodomaniac is a rape-revenge movie that comes from a different angle (ugh, no pun intended there), and where it first comes off as offensive, it proves itself as the story unfolds. There’s even a really cool, female sung version of The Ramones song, “Somebody Put Something in My Drink,” by Noizee, that is not only fitting of the film, but worth sticking through the credits for. If you like gross, and you can take a joke, this is a movie for you. Don’t be surprised if this one ends up gaining some cult classic status, it has all the right ingredients.