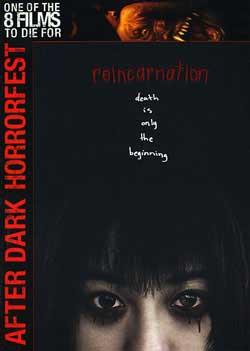 Timid actress Nagisa Sugiura gets a lead role in a horror film that reenacts a mass murder. Years ago, a professor obsessed with reincarnation, killed the staff and guests of a hotel, including his own children. Nagisa has visions related to the horrendous event, and soon can’t tell the difference between the movie-shoot and the real killings. She isn’t alone, as others of roughly the same age also have visions of the past, and many of them disappear. Is Nagisa insane, or is she a reincarnated victim, fated, with the others, to repeat their deaths?

The Examination: Bizarre and disorienting. A creepy doll, and a red bouncy ball, and you’ll be feeling like new in the morning!

Reincarnation is an interesting ghost story invoking nightmarish visuals and a complex narrative.

Film director Ikuo Matsumura (Kippei Shiina) finds himself determined in basing his latest horror film on a decades-old mass murder. Known as the “Gunma Hotel Murders”, the violent slaying of eleven hotel staff and guests, followed by the suicide of the perpetrator, shocked both the community and the nation. Among the victims were the murderer’s two young children. Ikuo’s goal is to capture an accurate reconstruction of the horror faced by the victims in their final moments. I don’t know about you, but that sounds like a smash to me!

After a number of casting interviews, Ikuo stumbles upon an unknown actress Nagisa Sugiura (Yuka) and immediately deems her the ideal candidate for the lead role of “Chisato”, the young daughter of the murderer. Could there be a karmic connect between Ikuo and Nagisa? What’s strange is that although Chisato was a mere 6 years old at the time of her murder, Ikuo decides to portray her as the twenty-something Nagisa. Huh?!? But what’s even stranger is that Nagisa has been having visions of Chisato holding a creepy looking doll even before seeing her photo or landing the role in the film.

I hate creepy dolls and I hate creepy kids. Now, moving forward, prepare yourself for both.While on set recreating the brutal events, both Ikuo and Nagisa begin seeing strange things. But they aren’t the only ones having weird experiences. We’re introduced to several other characters along the way that have frightening visions and confrontations by zombie-like ghosts, only to become ghosts themselves. Ghosts, zombies, whichever one. But once they get to the hotel where the murders took place, all hell and horrific memory is set free! One of the goodies includes the disturbing 8mm film collected from the crime site, filmed by the murderer himself. And yes, you get to watch it!

Through the 8mm (don’t run and grab your popcorn yet because it ain’t that long) we learn, along with the horrified Nagisa, what meaning belies the relation between the prior murders and the film’s cast and crew. And it seems that the anguish from what happened in that hotel 20 years earlier somehow manifests itself again and Nagisa has to somehow figure out the link between her, and Chisato, before its too late, all while re-enacting the tragic events from the past for Ikuo’s movie. And I’m telling you now, the link isn’t who you think it is.

What Reincarnation isn’t is Ju-On. It’s unnerving, not frightening. It’s thoughtful, not melodramatic.. There are no fountains of blood (OK, OK, one tiny fountain at the end) or freaks under the bed. It builds slowly to a savage highlight that’s completely entertaining but won’t give you nightmares, unless you don’t like weird dolls that is. Don’t expect to be shocked, but instead to be pleasantly surprised. And oh, did I mention there was a creepy doll? 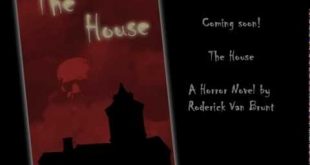