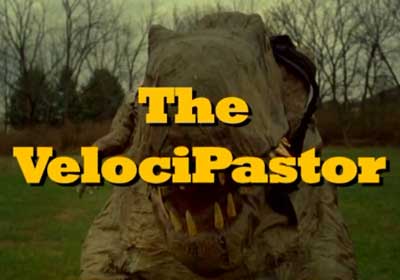 A priest is scratched by a piece of amber and begins to turn into a dinosaur. At first, he is horrified by his darker desires, but soon he realizes his powers might be used for good, albeit violent, murderous good.

Just take a minute and read this title again – THE VELOCIPASTOR.

I cannot rate the amount of happies the title alone gives me. I’ve actually started writing this review before I even watched it, because damn I love that title.

ok, let me go watch it and I’ll be right back…

ok, let’s see if I can settle down and explain this to you guys. 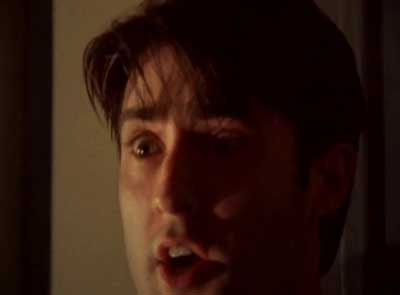 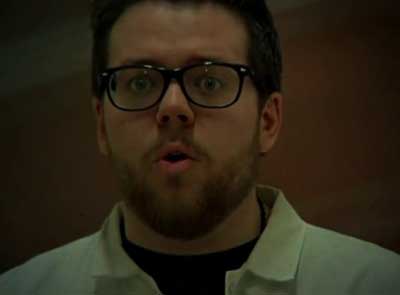 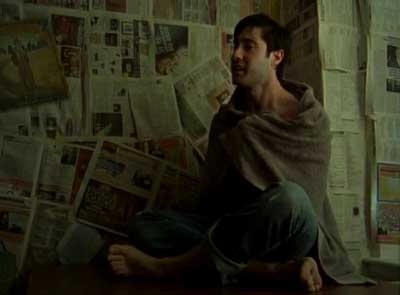 First of all, this film is only four minutes long. It’s like an old school, long form film trailer. Speaking of that, writer/director Brendan Steere totally old-schooled this film. Starting from the beginning with the now-outdated rating card, he gives us a classic cheapo film trailer. This is a film that I am willing to bet Roger Corman wishes he had made.

Father Jones (Matt Ziegel) has just returned from a missionary trip overseas. While he was there, he discovers a piece of amber at an archelogical dig. He cuts himself accidently on the sharp stone, and it changes his life forever.

Because he turns into a DINOSAUR. yes, a dinosaur. And the good Father must reconcile his faith with the blood lust of the predator that now rises within him.

I know, right? it’s freakin beautiful!! Mr. Steere uses every trope imaginable – boom mics in the shot, shadow of the camera operator on the actors, really hissy ADR sound, and don’t even get me started on the dinosaur.

I can’t stop laughing long enough to write this review. It’s such an epically beautiful slice of cheese-o-rama filmmaking that I’m gonna watch it again. 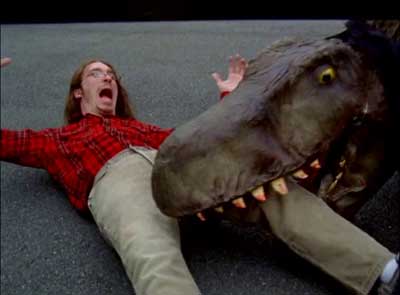 Oh man even the score is crap-riffic. This is simply a perfect parody of the films of the time period. It’s hard to accept that it was made in 2011. Comedy at it’s finest. Oh, and did I mention the tagline – Welcome to the Christ-aceous period.

A very small cast in this film, but everyone is just hilarious. You just gotta see it. That’s all I can say.

So rating with my special “short scale” on a scale of one to five (five being awesome), I’m giving this film five crappy effects.