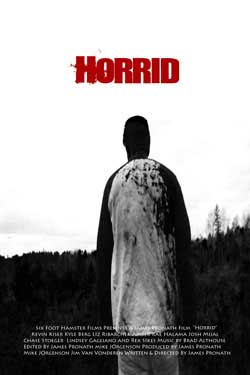 Take a trip to the north woods, but don’t plan on going home.

QUICK FIX:
John is getting married soon (Applause!!) and his friends, of course, decide that John needs his one final night of debauchery before tying the nuptialistic knot. After getting kicked out of a strip club long before the sun even sets (extra points for that right there) they decide to head up to one of the friends’ Uncle’s cabin in the woods where they can party in peace – or “piece” depending on how many chicks they can convince to come up with them, right? Right!

But wouldn’t you know it, the military and a group of pesky scientists have been in that very same area trying to stop an infected mental patient that has an unnatural craving for human flesh. So long before you can even think to say the words “zombie outbreak”, the infection spreads and instead of partying all night, the boys are fighting for their lives against a horde of flesh-eaters. And to think, all my bachelor party consisted of was tons of booze and sweaty, glitter-covered peelers vying for the right to brag about who could pelvic thrust their way into grinding a hole in my jeans first. Looking back on things, it was kinda boring compared to John’s night. As far as you know…

RAMBLINGS:
Sometimes, I really think that I have “sucker” tattooed on my forehead. Why, you may or may not ask? Simple – the one thing I love in my movies almost as much as werewolves, would be zombies. With werewolf flicks, I’m way more critical though, as I think my love for them transcends being able to “oooh” and “aaah” over them when they’re given the big shiny Hollyweird glossiness complete with tons of reshoots, a delayed release date, executive excuses, and still wind up sucking frosted goat balls. Yes, WOLFMAN, I’m talking to you.

But the zombie flick, I’m always much more lenient with for some reason – hence the “sucker” tattoo comment from above. I think it’s mainly to do with the fact that an indie filmmaker with even a tiny bit of a story can turn his project into a cool little zombie movie with a much lower budget than can they make the same thing work with our furry Lycan friends, and they have a much better chance of making a name for themselves in the horror world with a good zombie picture, no matter what the budget. Hell, I’d do my own if I could come up with a zombie storyline to drop characters into that no one else has thought of yet.

And that brings us to HORRID – a very cool little low budget effort from the great state of great cheese curds and Walleye fish (not to mention Ed Gein) – Wisconsin. Writer/Director Pronath did an excellent job of conveying fear, humor, paranoia, and left us with the “Zombie Standard” of a downbeat-style ending that was a different breed than anything I’ve witnessed in recent memory – excellent work!!

Although not available for general release yet, HORRID has been touring the festival circuit for a few months, and even snagged the Best Feature Film award at this year’s Hauntcon – congrats guys!

LAST WORDS:
While HORRID unfortunately does come with some of the trappings and limitations that plague many low budget indie horror movies – obvious makeup problems from time to time, lack of stuntmen to coordinate a proper bar fight, sometimes wooden acting performances from lack of experience – none of that took me out of the experience for this flick thanks to the heart that obviously went into the production of it as well as an entertaining storyline. I really enjoyed it, I highly recommend it for those wanting their zombie fix, and thankfully, the title of the flick doesn’t describe the viewing experience itself – keep your eyes peeled for this one, folks, and snag it once it hits shelves – I know I will!