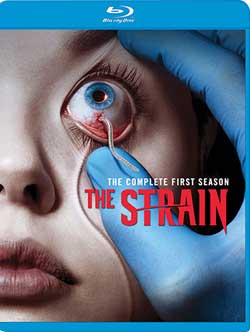 A thriller that tells the story of Dr. Ephraim Goodweather, the head of the Center for Disease Control Canary Team in New York City. He and his team are called upon to investigate a mysterious viral outbreak with hallmarks of an ancient and evil strain of vampirism. As the strain spreads, Eph, his team, and an assembly of everyday New Yorkers, wage war for the fate of humanity itself.

“The Strain” is a 2014 TV series master-minded by Guillermo del Toro and Chuck Hoganboth (whom were responsible for the trilogy of novels under same name). The series was championed by FX network with its initial premiere airing on July 13, 2014. Now with “The Strain’s” run of 13 episodes finishing off the season, we can better enjoy the series collection all in one sitting.

I had long anticipated The Strain’s arrival. As a fan of Guillermo del Toro work, I knew that it would not be just your run of the mill style of story telling. After all, del Tor is know for his theatrical flair in film mixed with lore, mythology and the fantastical. I was sure what to expect from the series…though I surely was intrigued. 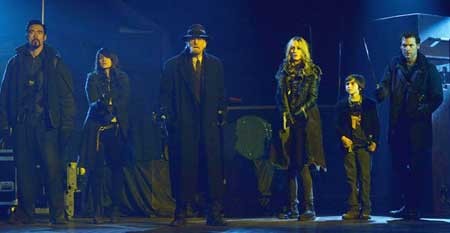 I resisted the urge to follow week to week rather opting for an entire sitting. This meant a single longer viewing cycle but with the befit of continuity.

We begin on the note of an airplane that lands in silence at the John F. Kennedy International Airport. Essentially, a dead cold vessel, the plane is quickly investigated by a rush of scurrying local officials. At the helm is Dr. Ephraim “Eph” Goodweather (Corey Stoll) the head of the New York CDC team. Goodweather and his partner Nora Martinez (Mía Maestro) seize control of the plane under the suspicion that a virus of some sort was responsible. Onboard, all passengers lie (presumably) dead leaving 4 survivors.

The event comes under quick scrutiny as we begin to meet our central characters. First up is Thomas Eichhorst (Richard Sammel), creepy old vampire who has been awaiting the arrival of his “package”. This package comes wrapped in a oddly carved coffin, the resting place of the “master” himself. 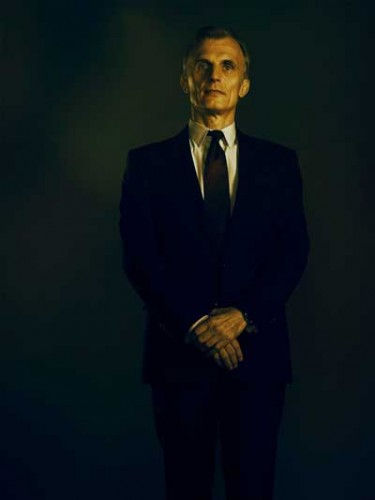 As the story rushes forth it makes full use of the time available by really diving into the individual characters lives. We grow to know them and their pains which in itself is far removed from vampires and epidemics. Thomas is first to reveal his struggles as he fights for custody of his child while having to see his wife Kelly shack up with her boyfriend. Thomas, however wears his dedication to his job on his sleeve often looking at times like he never sleeps. His expertise and professionalism seems to run him more than him running it. The result arrives in his life falling apart at home. While his reluctance to leave it all behind conflicts with his best interest, his family. 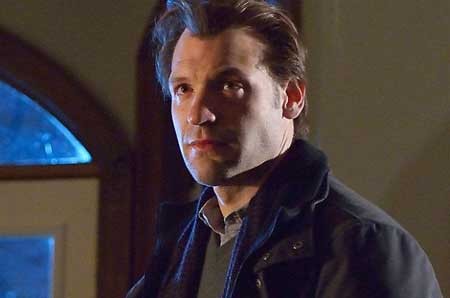 We immediately begin to see Thomas as the series protagonist who unites forces with a very unlikely elderly character (David Bradley ) Professor Abraham Setrakian. Abraham has been at this for quite some time knowing full well that “the master” is determined to invoke his evil and dominance over man. Part of the initial struggle lies with convincing others of the monsters that are growing within their midst. This turns for the worst as these vampire parasites start to grow in numbers unleashing their fury. The style of aggression bears similarities to the zombies from “28 Days Later“.

“The Master” provides a conductor-like influence over those in power which begins to work the system for his arrival. Part of that systems includes Thomas Eichhorst (Richard Sammel) one of the series main antagonists. Eichhorst fills the shoes of the series villain role perfectly acting as a primary figure in “the Strain’s” story and timeline. What is most interesting is that the series contains multiple protagonists and antagonists each providing history and reason to the events that unfold. Even if “The Master” were to never show his face, Eichhorst still orchestrates much of the evil that flows thru out this series.

For those who are wondering, “The Master” does reveal himself later in the series? Yes, however (and a hats off to Del Toro again), we are not fed everything up front. It’s a slow reveal that is earned and hungered for by the time he makes himself present. In the meanwhile, we are entertained with phantom appearances fully cloaked towering high with hands as big as a man’s head. The character dynamics are brilliantly played out. 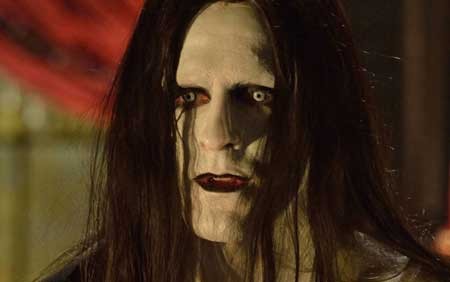 With this of course we get smaller subplots into each of their private lives and how they found their way into the story.

“The Strain” is not your everyday vampire film. “The Strain’s” hybrid rooted design mixes its vampire shell against a backdrop of modern day viral epidemics, drama, transformation and alien-like science fiction. There are no aliens in this film, but the creatures themselve seem to borrow from a mix of body snatchers, “The Blade”, “Salem’s Lot” and “the Walking Dead”. It’s this mixture that presents a TV series that stands on its own design partly to follow the main characters and their subplots while also never losing site of the threat that is evident in every episode. “The Strain” is also not very forgiving. It seizes and swallows up main characters left and right much in the way that “The Walking Dead” might. All thru action and enigma lies a solid foundation that rests comfortably under the grand design of Guillermo del Toro’s unique and identifiable style. 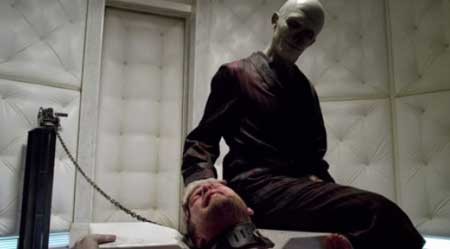 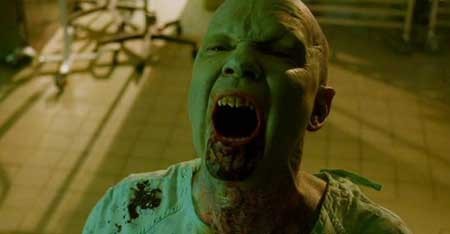 It was extremely evident that years of planning went into the structure of this epic. This is also revealed in some of the behind the scenes discussions. The series flips between an earlier Third Reich timeline 70 years in the past allowing the 2 oldest characters to form a history lasting up to present day. We learn the origins of the well crated coffin and the need for rectification from Abraham Setrakian, the resident Van Helsing figure.

There was more than one surprise in this series that keeps the dynamic of the show hurling forward. Just when things begin to form a comfortable pattern, Del Toro pulls a fast one and sends it in another direction. I consider this a token of brilliant writing and planning across the board. The series actually gets better with every episode, so for those who might not grab its rhythm in the first couple shows, you are advised to stick it out. It’s not as predictable as you “think” it might be, however now having gone thru all 13 myself, I can say that its an epic that must be seen. 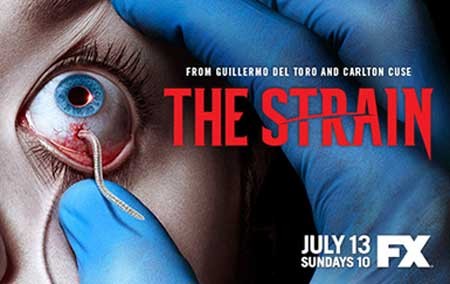 “The Strain” is a product of great storytelling and great character development. We have plenty of time to establish all the characters to the point that they matter. I compare this TV dynamic to the success that “The Walking Dead” has earned among horror fans. Perhaps it is better that you missed it during its run so that you can enjoy the full story uninterrupted. Prepare to invest the time it deserves and grab the series on bluray. The extras add great reveal to the making of the series and the insight by the series primary creators.

Easily among one of the best horror series I’ve seen to date, “The Strain” is simply remarkable.

The Strain is now available on bluray per 20th Century Fox