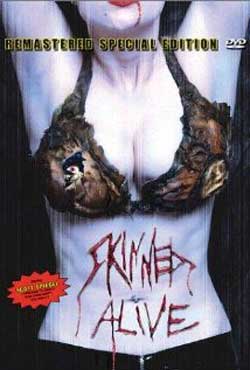 A family of weirdoes travel around looking for victims to skin for the leather company that they run. When their van breaks down in a small town a friendly mechanic lets them stay with him and his wife while he tries to fix their vehicle. Will they be the family’s next victims or will the alcoholic former cop that lives next door be able to save them before it’s too late?

I actually picked up a copy of Skinned Alive at a horror convention back in 2003 because I thought that it sounded promising (plus it had cool DVD cover art). I’ve always been a fan of producer J.R. Bookwalter’s work and went into the film with some pretty high hopes. I have to admit that I was a little disappointed when everything was said and done. I thought that it was a little too hokey for my tastes and hate the fact that the writers decided to include so many comedic elements. It had potential to be something really awesome but I think that the inclusion of comedy ruined it in a lot of ways. It’s very rare for me to like a horror/comedy and Skinned Alive was no exception. 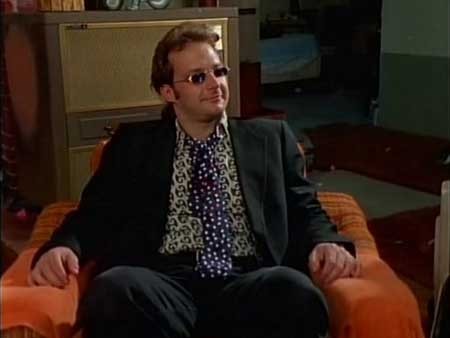 Without a doubt one of the biggest problems I had with this film is the fact that it tries way too hard to be funny. Most of the humor falls pretty flat and instead of laughing at it I spent most of the time rolling my eyes at how bad it was. I don’t think that I laughed a single time and thought that the majority of the “funny scenes” were just silly and stupid more than anything else. Maybe I’m in the minority here, but I really don’t want my horror movies to be funny. Nobody can quite pull it off (with the exception of Troma, Tim Ritter, and Speed Freak Productions) and I really wish that horror filmmakers would get it through their heads that 9 out of 10 horror/comedies are just plain bad and are complete wastes of time for all intensive purposes. With that being said I wouldn’t necessarily say that Skinned Alive is a waste of time because it does have its moments from time to time, but it isn’t what I would consider a great film by any stretch of the imagination. It’s a little frustrating to me because had the filmmakers played it straight it might have turned out to be quite an entertaining little slasher flick. 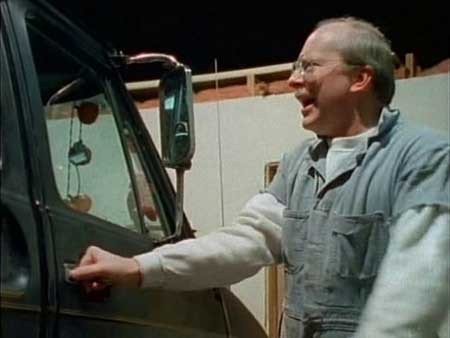 I also didn’t really care for any of the characters either. The demented family (which reminded me a little of the family from the far superior Mother’s Day from 1980) was pretty lame and none of them were that intimidating. I found the mother, Crawldaddy, to be particularly annoying and the scene where she is cramming food in her mouth is just beyond disgusting. Violet (Susan Rothacker) was a little bit better but she was really nothing to write home about and her one-liners got old very, very fast. Scott Spiegel (who wrote the totally awesome slasher flick Intruder, Evil Dead 2, and several other great horror flicks) is pretty much wasted here as Phink and his goofball antics and comments grated on my nerves like there was no tomorrow. 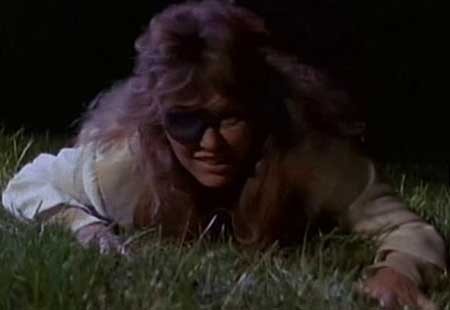 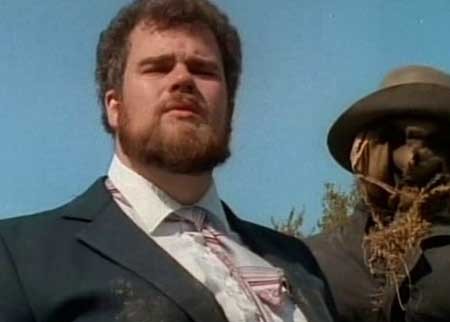 Probably my least favorite character though was Paul (played by Floyd Ewing Jr.). He sits around doing pretty much nothing for most of the film (aside from getting drunk and arguing with his wife on the phone) and then toward the end he essentially turns into Rambo or something and goes around shooting up the villains with a machine gun like he is some sort of badass. He makes a very unbelievable hero and watching him fight or blast the hell out of people with his gun was just beyond corny and ridiculous. I don’t think that I liked a single character that appeared in the movie and to be honest I didn’t care if they lived or died (actually I was eager for most of them to die so I wouldn’t have to look at them any longer. 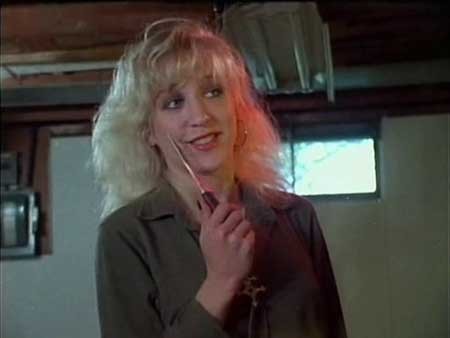 On the other hand, not everything was bad about Skinned Alive. There were some pretty cool death scenes and for a movie that probably had a pretty low budget the effects look great. We get some pretty realistic-looking gore at times and I was impressed by how well done it was. To be honest some of the gore looked better than some of the things I’ve seen in movies that had a much bigger budget (the skinned body that they end up leaving in the back of the van looks spectacular if you ask me). It’s obvious that a lot of time, work, and effort went into creating the blood and guts for the movie and despite its many flaws I can’t knock the special effects that appear in the film. 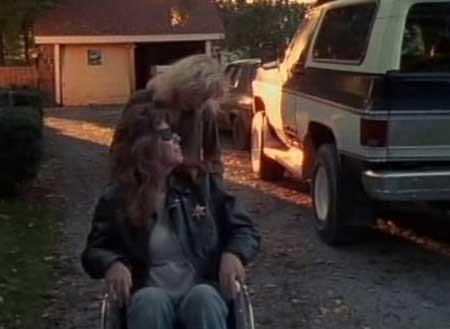 Skinned Alive just wasn’t for me. I really wanted to like it as I thought that it sounded like it might be a contender but the sloppy execution, writing, and acting ruined it for me (don’t get me started on the idiotic twist at the very end). I thought that the movie was overly silly and I just couldn’t get into it. I have a difficult time recommending it, but by all means if it sounds like something that would appeal to you check it out. You may see something in it that I didn’t.