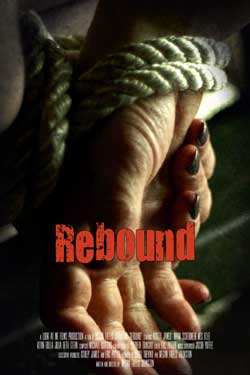 Claire catches her boyfriend in bed with another woman. Out of the utmost despair, she decides to move to Chicago. Her trip, though, quickly turns disastrous.

REBOUND opens with one of the silliest flashbacks to a sex scene I’ve ever watched. It’s in slow motion. The woman is on top, still in her bra, grimacing at the camera. The credits roll. Is it supposed to be sinister? Artsy? Comical?

The camera assumes the perspective of Claire (Ashley James), walking in on her significant other, who is getting some serious adulterous action. Claire is devastated. You can tell she is quite depressed by all the lamenting face rubbing, all the Nyquil she’s draining, the continuing flashbacks to that crucial moment, the grimacing woman and Claire’s boyfriend—doing it!

She’s so miserable she decides to relocate to Chicago, despite her best friend’s advice not to. Driving through Nebraska, after all, “smells like poo.”

Nevertheless, Claire leaves town, and, right off the bat, things go wrong. Is it an omen, when some fat, creepy homeless lady bangs on the bathroom stall, screaming, “Got any toilet paper?!”

I think it is.

She loses her cell phone. Then her car breaks down. And she meets Eddie (Mark Scheibmeir), a mechanic, who agrees to fix her car. But things really derail when she sits down at a local bar and takes a few sips of her c**ktail . . . which has Rufinol in it. Eddie sat down next to her. She stepped out to make a call on the pay phone. Was it Eddie who slipped her the drug???

Yep. Eddie is psychotic, and decides to hold her hostage. Why? Because he “saw something in her,” and “wanted to make her stronger.”

REBOUND suffers from the acting. I don’t mean Ashley James is merely reciting lines. She does realize a semi-believable character. She’s likeable enough, and somewhat relatable. But Ashley James doesn’t push it far enough. We never feel her pain. Claire says she’s having the worst day of her life at a point in the film. Worst day of her life? She doesn’t seem that out of sorts about things to me. She is so calm, relatively speaking. There should be anger, things being thrown—you know, fits of rage . . . along with the moping. We mostly get moping, though. And Eddie’s a Norman Bates sort of guy . . . but without the Oedipal thing going on. Mark Scheibmeir’s performance of maniacal behavior seems uninspired.

The movie’s attempts at suspense fall flat, too. The energy in the set up just isn’t there. Not enough is done before Claire is in danger for the tension to build. If suspense is an edifice, then REBOUND’s foundation is shoddy, leaving the film to come across as a cut and dry series of unfortunate events. All you can really say is, “Sucks to be you, lady . . . ” And, yes, of course, it’s a shoestring budget. I know you can only do so much.

The atmosphere is missed, too. Everything looks so normal and banal. The vibe could be so much more creepy. And the camerawork isn’t very daring, either. Mostly, it does bleak and it does sterile. That’s the low budget horror vogue these days (ABSENTIA, THE OREGONIAN, THE PACT). But it isn’t executed as trenchantly as it is in those movies. The few cinematographic attempts at carrying things over the rails wallow in ridiculousness—as that sex scene will attest. Please, stop flashing back to that. Please.

Ultimately, everything is presented in such a matter of fact fashion, that it never feels like the nightmare it was intended to be. Nevertheless, writer and director Megan Freels, given a budget, could make a worthy suspense flick. The talent is there and so is the drive. See REBOUND to support up and coming horror talent, not to wallow in a nightmare.