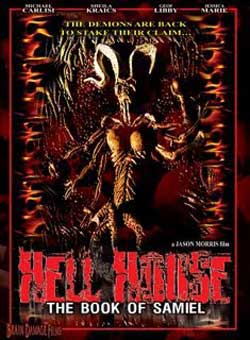 Every small town across America has that one house that teenagers dare each other to visit. The Shively house isn’t much different from the rest of these ghost stories, except its not really ghosts that occupy the Shively house. Something there is celebrating its ten year anniversary and the four teenagers who have decided to spend the night in the “haunted house” have no idea just what kind of night they are about to have.

“Shit like that is why we never had kids!”

One thing I have always enjoyed about the horror genre is the independence of it, most of our most cherished films these days were low budget films done by no name directors and casts when they were first released (Halloween anyone?). This independence has been embraced by the genre’s fans, if you don’t believe me take a stroll around the next horror convention that comes in your area and see just how many fliers and demo DVD’s you are given. Unfortunately watching independent horror is a lot like shopping in the local section at your local music store, sometimes you find that special something that makes you rant and rave to your friends; most of the time however you simply find the same rehashed crap you have seen millions of times. I am in no way referring to Jason D Morris’s Hell House as rehashed crap; there are some original ideas inside of here. I will however state that fans of the Hollywood produced cinema will probably do best to avoid the film as I really don’t think they could tolerate it.

Jason D Morris’s Hell House, or Hell House: The Book of Samiel as it’s also known, is a low budget film. It looks low budget, it’s casted with a group of unfamiliar faces and the audio track is horribly overdubbed. At the first viewing I thought perhaps it was just my copy but after doing some searching around I have learned that yes indeed the film is overdubbed horribly which leads to a lot of distortion making a lot of the dialogue in the film hard to understand, the scenes in which music is being played are almost inaudible all together. The special FX as a whole are decent for its budget, until the cgi starts being over used in certain scenes.

Hell House starts by showing a “witchy woman” who is doing a tarot card reading, and obviously it’s a bad one being that she even gets a glimpse of a devil like figure before the credits start. After the credits role we get to see a group of four teenagers, two guys and two girls of course, lighting off fireworks and telling a grisly urban legend about the place where they are at the moment. The Shively house you see was the scene of an act of horrific violence when ten years ago a father caught his daughter in the art of necking with her boyfriend. The father in a fit of rage kills both of the teenagers with a shot gun and then proceeds to set their car on fire to get rid of the evidence, pretty good back story and the flashback sequence that shows it was handled very well. While the kids are playing around though trying to outdo each other with practical jokes (one gets kind of spooky) a local news crew is filming a story about the ten year anniversary of the horrible events that happened.

The news crew is a man and a woman and a character that is named Jimmy the Jimmy. The monitors start fritzing and obviously there are a lot of complications occurring while they film the short sequence but the crew decides to finish it up and get back to the hotel. The news man and woman obviously have a thing for each other and quickly make their way to their hotel room for some private time together. Jimmy on the other hand seems kind of strange, and he looks a little bit different as well. He watches the couple from the window before storming into the house and attacking the lovers. After attacking his two colleagues the young man props them up beside their car and then starts to pour gasoline all over them, as well as himself.

After all of this I thought to myself that the budget restraints weren’t going to hold me back from enjoying the film. I thought all of this before the first montage scene in which we hear the two teenage boys, named Paul and Steve discussing spending the night at the Shively house. The group of four start to plan for their evening and we are pretty much only supposed to care about Paul and his girlfriend Dani. Paul has an alcoholic father who works in the real-estate business (an easy way to get the keys to the Shively house) and Dani’s father beats her frequently. I really don’t think we are supposed to care about Steve or his oversexed girlfriend Sasha. The scenes with Paul and Dani are done very well, particularly when Paul arrives to pick her up for the trip and Dani informs Paul that her father once again has beaten her. Mike Carlisi’s performance in this scene shows a lot of promise in future works.

The four teenagers arrive at the house and of course all kinds of crazy stuff starts to happen. First is a strange man has shown up at the house and seems to be possessed by it, he mostly just stalks around and almost makes it seem like the film is about to go into familiar slasher territory, I think the guy might be Paul’s father, the chaos at the end of the film was kind of hard to follow. Steve has a lot of giant bugs fall on him. Paul has a crazy dream where he thinks he is having sex with Dani only to realize he is having sex with a ghost. Steve and Dani both become possessed at one point by the ghosts in the house and reenact an argument in front of the group. The over sexed Sasha decides in the middle of all of this to take a bath and pleasure herself, only to be interrupted by the strange wandering man. While these scenes are going on we are also treated to various dream sequences showing the past events, it doesn’t sound too confusing now that I’m writing this but viewing it was awful confusing at times.

Jason D Morris’s Hell House is a film that is hampered by its low budget, but at least he made his movie and told his story. I am sure there are probably going to be a lot of negative reviews for this film, but I am also sure those who are giving this film the negative reviews aren’t looking at some of the excellent camera shots and the beautiful use of color that sets up the creepy atmosphere of the film. I’m sure also that they do not notice that the house itself is a hell of a location and Mr. Morris takes full advantage of it turning the house into its own terrifying creature. The ending of the film seems kind of rushed, and the whole ghost story that I liked at the beginning of the film is kind of tossed out of the window. During the ending we are treated again with extremely overdubbed music and some pretty bad cgi, just when a viewer thinks “I can’t take anymore of this” however the main cause of all the commotion is beaten with a stick, so perhaps Jason D Morris knew what he was doing after all.

I wouldn’t say that Hell House is a great movie, it however is a good attempt with the budget that the film had. I will also state that I believe that the film shows great promise not just for Jason D Morris but also for Mike Carlisi.